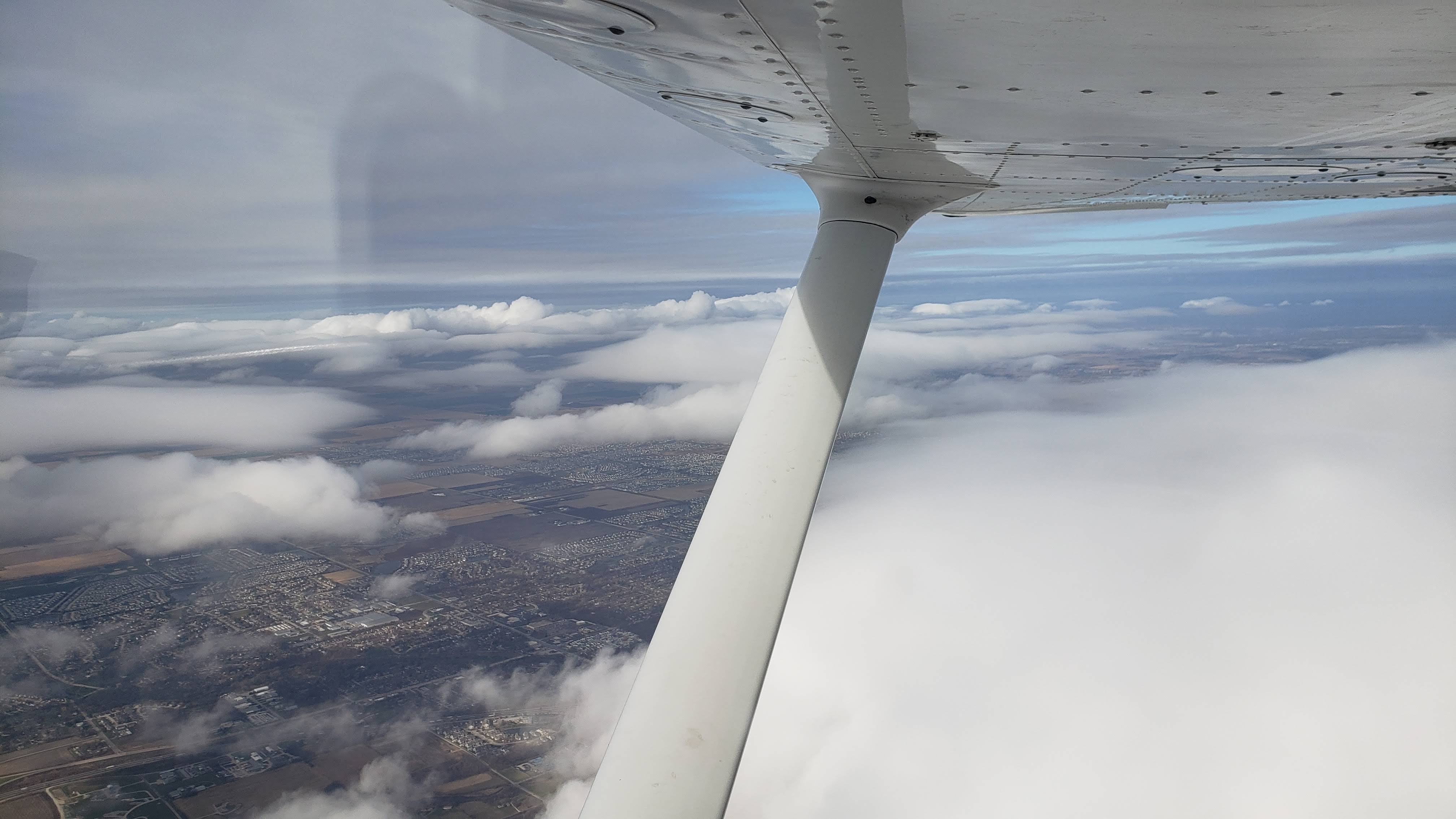 When ice forms on an aircraft, it will have an adverse effect on aircraft aerodynamics and performance.

Each of the main aerodynamic forces experiences a negative side effect because of ice. Ice formation causes the maximum amount of lift and thrust created by an airfoil to decrease. Ice also causes the amount of weight and drag acting on an aircraft to increase.

Ice creates a significant hazard to flight, even with small amounts of ice buildup. Therefore, a pilot must recognize the three types of aircraft icing to determine the best course of action to exit the icing condition.

Aircraft icing is categorized by its appearance and location on the aircraft.

The location of aircraft icing is generally categorized as:

The ice's visual appearance also gives clues to the conditions causing the ice to develop and the required actions needed to exit the icing encounter. The ice's physical appearance categorized it as either:

Structural Icing is ice that forms on the exterior of the aircraft. Structural ice will form when supercooled water droplets freeze and adhere to the aircraft's surface.

Smaller objects tend to form structural ice before larger objects. Small objects within sight of the pilot, such as OAT probes, antennas, and windshield wipers, can be used as visual cues for structural Icing before other parts of the aircraft.

An aircraft's tail is also more likely to develop structural ice for the same reason. Since an aircraft's tail presents a thinner surface to the airstream, ice will form faster on the tail than the wings. Therefore, if a pilot sees ice on the wings, it is almost certain that ice has formed on the tail of the aircraft.

Different locations can have induction icing occur. Prime locations include an aircrafts carburetor and air inlet.
Carburetor ice can build whenever an aircraft operates in temperatures between 20 - 70 degrees Fahrenheit. High humidity and low power settings also increase the chances of experiencing carburetor ice. When carburetor ice occurs, the air and fuel traveling to the aircraft's engine will be restricted, resulting in reduced power and engine roughness.

Induction icing on an aircrafts air inlet will cause a reduction in useable air for combustion. Similar to carburetor icing, this reduction in air also results in a decrease in engine power.
General aviation aircraft typically have an alternate air source that may be selected by the pilot or automatically deployed to remedy air inlet icing when it occurs.

Turbojet aircraft are also susceptible to air inlet icing due to the area of reduced pressure created at the engine inlet. The reduction in pressure lowers the temperature of the surrounding air and causes ice to form. Once formed, ice can disrupt the engine's airflow and become ingested into the engine if it breaks off. Ingested ice can damage engine components such as the fan blades and cause engine compressor stalls or flameouts.

Build up of ice on engine inlet temperature or pressure ratio gauges can also cause incorrect engine parameters causing engine operation difficulties or a total loss of power.

Propeller icing occurs when ice builds on the propeller blades of an aircraft. Ice that forms on aircraft propellers causes the blades to experience a reduction in thrust at all power settings. The greatest amounts of propeller ice will typically collect on and around the propeller spinner.

Ice that forms on the propeller may shed off and potentially become ingested or damage the engine behind it. Therefore, the areas prone to propeller ice are typically protected by anti-ice and deice systems on FIKI approved aircraft.

Antennas tend to accumulate ice rapidly due to their small size and shape. Many antennas also do not lay flush with the aircraft's skin and protrude from its surface, increasing the amount of ice that can form.
Antenna Icing is hard to remove because aircraft antennas generally do not possess an anti-ice or deice system.

Ice that develops on an aircraft antenna may cause the antenna to vibrate or cause radio signals to become distorted and unusable. Pilots that have encountered antenna ice state that a vibrating antenna sounds like a howl. A vibrating antenna can damage the antenna or completely separate it from the aircraft, potentially damaging other parts of the aircraft in the process.

Tailplane icing is ice that forms on the aircraft's tail. Since the tail of an airplane is hard to be seen from the cockpit, the buildup of ice may not be able to be noticed, and the effectiveness of deicing may not be known.

Most aircraft are manufactured to have a nose-down pitching moment due to the center of gravity being ahead of the center of lift.

The aircraft's tail counteracts this nose-down moment by providing a tail downforce. Ice buildup on the aircraft tail may cause this downward force to decrease and result in a tailplane stall.

When ice has formed on the tailplane section, actions that reduce the aircraft's stalling speed, such as deploying flaps, increase the chances of experiencing a tailplane stall.

Warnings of a tailplane stall include:

Should any of these occur, a pilot should:

Aircraft systems all rely on pitot tubes and static ports to feed outside pressure into them to function correctly.

The pitot tube is particularly vulnerable to Icing. Even light Icing can block the entry hole of the pitot tube and cause incorrect airspeed readings. Pitot heat can help recover from iced pitot tubes but may not be sufficient in extreme icing conditions.

Stall warnings systems that become blocked by ice may send false signals to stick shakers and other stall warning devices. Pneumatic stall horns may fail to indicate an impending stall if the opening becomes frozen over. If a stall horn is still functioning correctly, it may not warn of a stall if the wings have developed ice. This is because a wing with ice will stall at a lower angle of attack than calibrated on the stall device.

Some aircraft avionics also use external air scoops to cool key aircraft components. These inlets may not be protected by icing protection systems and are susceptible to Icing.

Clear ice has a clear appearance, hence the name, and may look like a glaze on the aircraft wings or form a horn shape on the leading edge. This type of ice is denser, harder, and generally more transparent than rime ice.

Clear ice is most likely to form when:

Freezing rain also presents the ability to form clear ice. Freezing rain's most dangerous property is that it creates liquid water that may freeze on contact or remain liquid as it travels back across the wing. This traveling liquid water can allow ice to form beyond the protected sections of a wing. Ice that has formed beyond the protected sections of a wing can not be removed or prevented and can quickly build to dangerous levels.

For this reason, if freezing rain is suspected, a pilot must make every effort to exit the icing condition as soon as possible.

Characterized by a rough, milky, and opaque appearance, Rime ice is formed as liquid water instantaneously freezes or rapidly freezes as it strikes the aircraft surface. This rapid freezing causes air to become trapped in the ice, which gives a rough and milky appearance. Air pockets also give rime ice a porous and brittle texture.

Rime ice is most likely to form when:

The most common type of ice is mixed ice. Mixed ice is the combination of Rime ice and Clear ice and has a cloudy appearance.

Mixed ice will form when conditions do not favor either rime or clear ice. Changing conditions can also cause ice to change from one type to another as the flight progresses.

Generally, mixed ice will form on top of other ice layers and cause mixed ice to revert between clear ice and rime ice as it forms or melts.