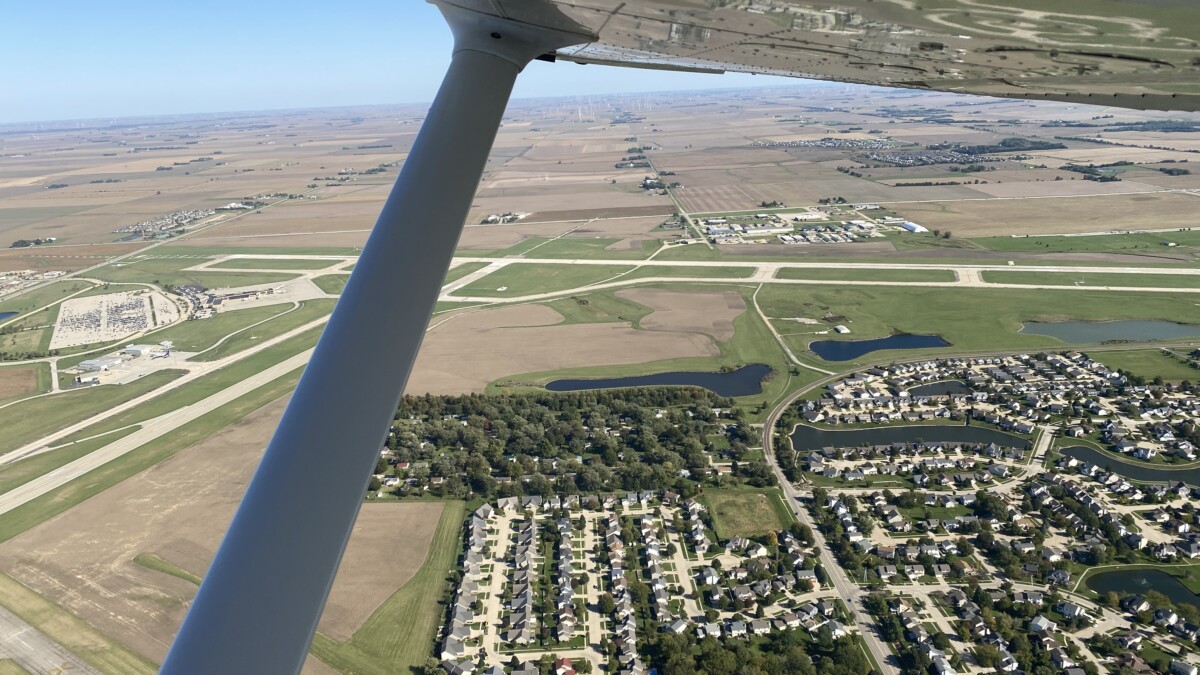 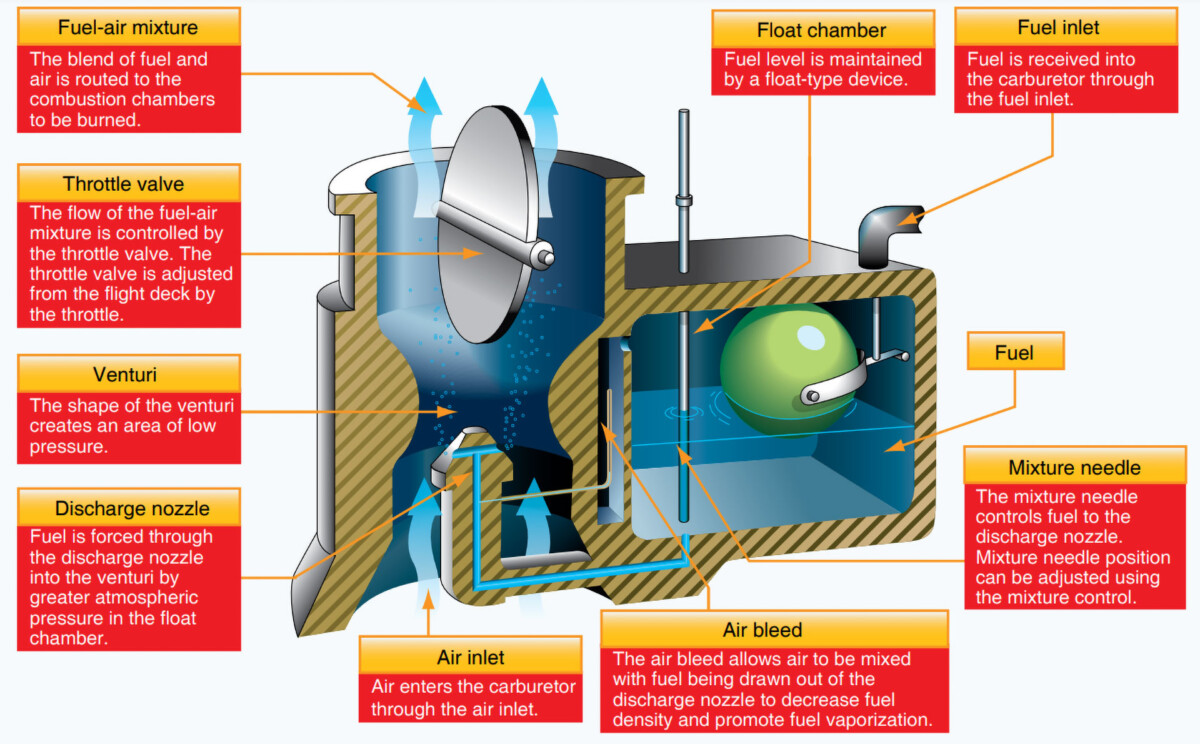 Float-type carburetors work by passing air first through an air filter, and then through the carburetor. Within the carburetor, the air is forced through a narrow section called a venturi. The venturi forces the air to speed up as it passes through and creates a low-pressure area within the venturi.

The low-pressure area is used to pull fuel from the main fuel jet, located at the opening to the venturi, and into the airstream where it is mixed with the flowing air.

This design has 3 main flaws: 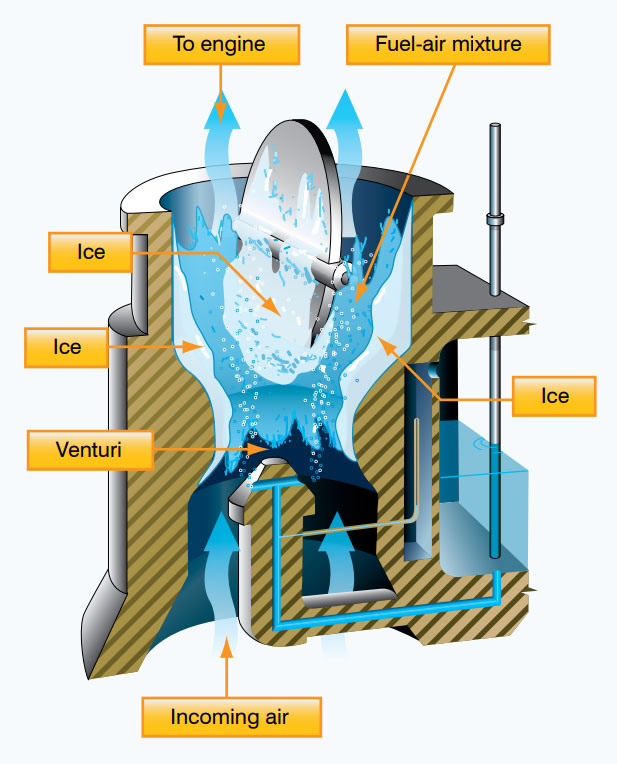 Ice build-up within the carburetor, or carburetor ice, is a well-known and documented phenomenon that can occur within a float-type carburetor.

Carburetor ice occurs because of 2 reasons:

Air experiences a drop in pressure when it speeds up due to Bernoulli's principle.

This is the same principle used to explain why wings create an area of high and low-pressure area below and above the wing's surface.

Therefore, as the air speeds up it experiences both a drop in pressure and temperature due to the venturi of the carburetor.

Additionally, as fuel is vaporized from a liquid to a gas within the carburetor it absorbs heat. This process is similar to how sweat evaporates and cools us down in the summer by taking heat away from our bodies as it evaporates.

When Carburetor Ice Can Be Expected 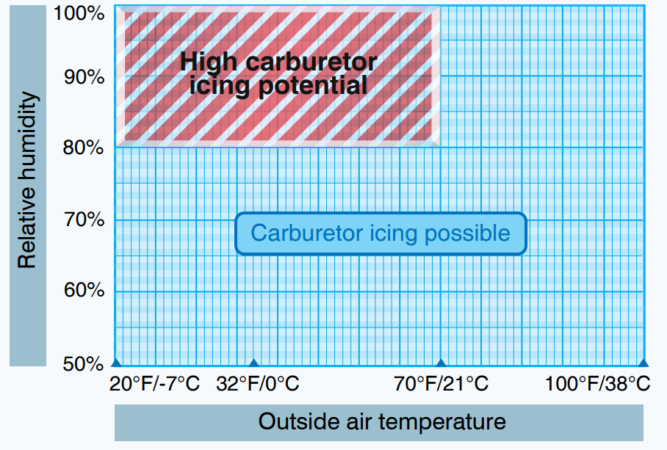 Carburetor ice is most likely to occur when temperatures are below 70 degrees Fahrenheit and the relative humidity is above 80%.

However, carburetor ice is capable of occurring at outside air temperatures as high as 100 degrees Fahrenheit or higher, and with humidity as low as 50%.

Carburetor ice is able to form at these high temperatures because the drop in temperature within the carburetor can be as great as 70 degrees from the outside air.

Additionally, carburetor ice is also most susceptible whenever the throttle is closed during flight. This is due to a rapid cooling of the engine at the reduced power setting, and less complete vaporization of fuel at the cooler temperature.

How To Determine If You Have Carburetor Ice

The signs of a carburetor ice change depending on if the aircraft has a fixed-pitch or constant-speed propeller.

The first sign of carburetor ice on aircraft with a fixed-pitch propeller will be a decrease in engine rpm, followed by engine roughness.

Aircraft with constant-speed propellers will have a drop in manifold pressure rather than a drop in rpm. Rpm will remain constant due to the changing pitch of the propeller.

Additional signs of carburetor ice can include a loss of power, altitude, and airspeed. In some instances, engine vibration may also occur.

How To Remove Carburetor Ice

The main solution available to a pilot to remove carburetor ice is the application of carburetor heat.

Carburetor heat is an anti-icing system that preheats intake air before it reaches the carburetor. The preheated air keeps the fuel-air mixture above freezing and prevents the formation of carburetor ice. Carburetor heat can also be used to melt ice that has already formed in the carburetor if the amount of ice accumulation is not too great.

Carburetor heat is, therefore, more suited at preventing carburetor ice than to removing it.

To prevent carburetor ice, pilots should apply carburetor heat whenever low power settings are selected. Such as during descent, approach, and landing.

When used, carburetor heat can cause engine power to decrease by as much as 15%. This decrease in power is due to the heated air being less dense than the outside air, resulting in an enriched mixture.

If no carburetor ice is present, when pilots apply carburetor heat the engine rpm will drop by 15% and remain at the decreased rpm setting. Aircraft with constant-speed propellers will notice a drop in manifold pressure with carburetor heat applied.

If carburetor ice is present, pilots will notice a reduction in power due to ice being present. Upon application of carburetor heat, engine power will decrease an additional 15%. As the ice begins to melt, engine rpm will decrease and engine roughness may increase due to melted ice entering the engine as water. Many pilots make the mistake of turning off carburetor heat when this occurs, which only aggravates the situation.

The time it takes for carburetor ice to be fully removed can last from 30 seconds to several minutes depending on the severity of icing.

After the ice is removed, pilots may wish to continue using full carburetor heat to prevent any further ice accumulation depending on outside conditions.