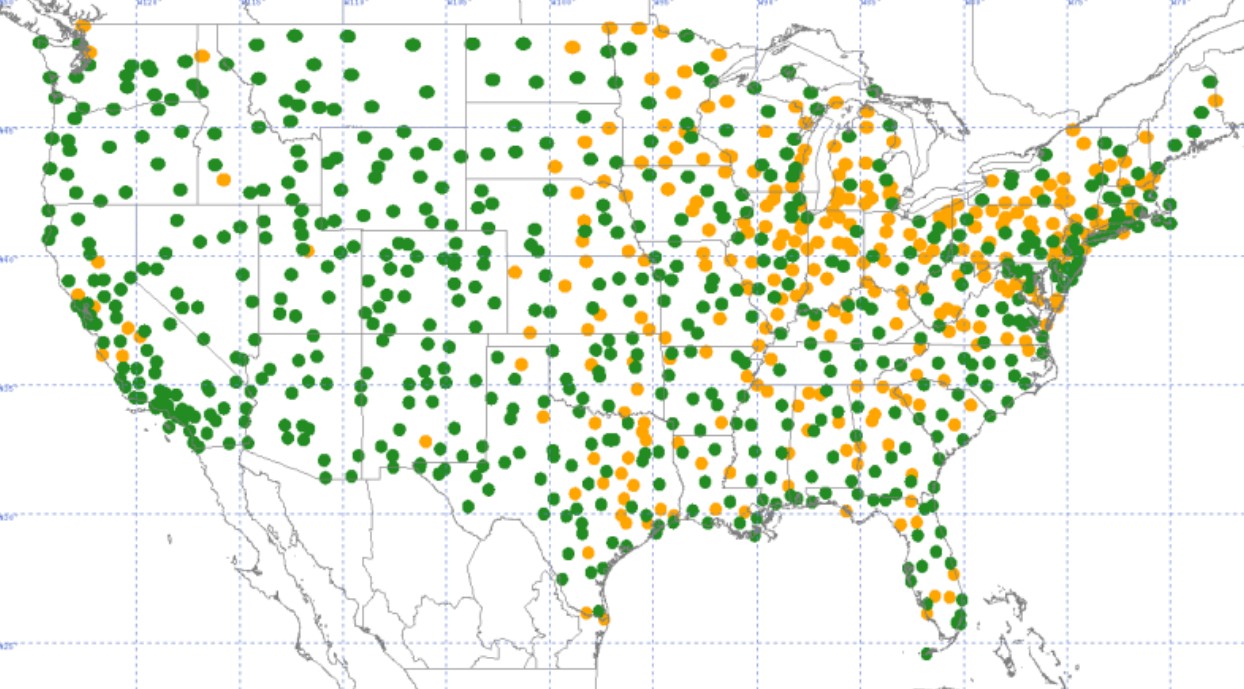 The Very High-Frequency Omni-Directional Range Minimum Operational Network (VOR MON) is the end product of the FAAs initiative to reduce the amount of traditional ground-based VOR stations from 896 to 589 operational VORs. In the featured image, every yellow dot represents potential VORs to be decommissioned, and green dots represent VORs that will remain. 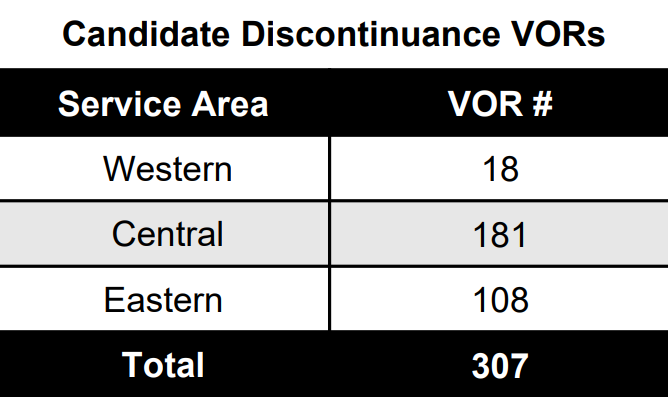 The FAA's implementation of the VOR MON began in 2016 with phase 1. This phase saw the first steps to creating the VOR MON and also adjusted affected Instrument Flight Procedures by either removing, replacing, or amending them. Phase 1 also saw the removal of 74 VORs. In 2021 phase 2 begun and is expected to continue until 2030. This phase will bring the full implementation of the VOR MON and the removal of 225 additional VORs. Instrument Flight Procedures will also be continually adjusted throughout phase 2.

This change was brought about by the FAAs' shift towards the more modern GPS methods of navigation such as RNAV, RNP, and PBN navigation.

Note that the information given is subject to change as the VOR MON is continuously developing as it is implemented.

Key Points Of The VOR MON 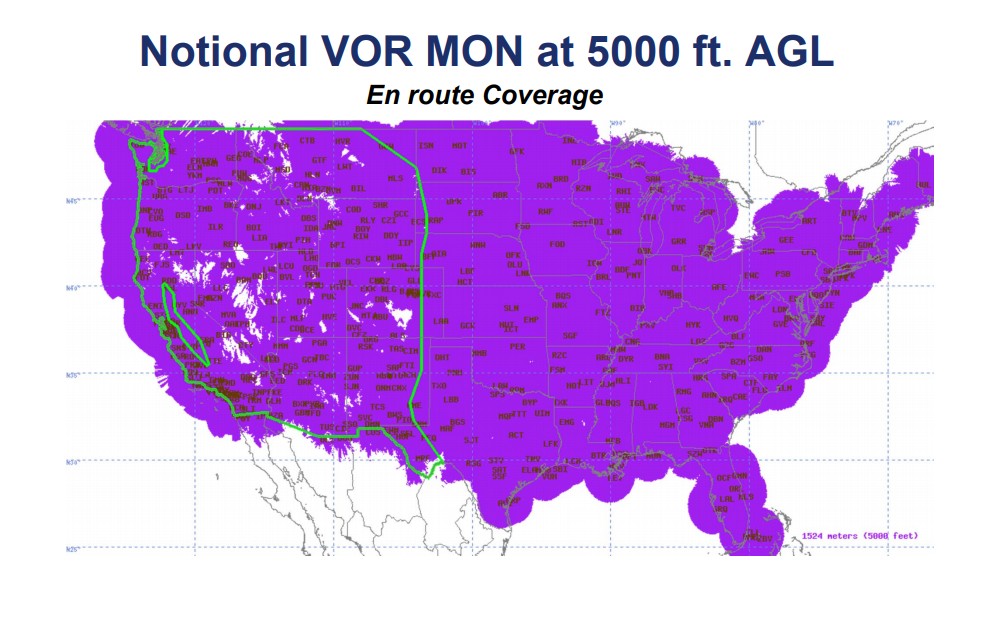 The VOR MONs end goal is to support the national airspace's transition from VOR based routes to more efficient performance-based navigation (PBN). The benefit of PBN is that it allows point to point routing that is becoming increasingly popular as GPS navigation methods become commonplace.

In case of a GPS outage, the VOR MON will enable pilots to revert from GPS navigation to conventional VOR to VOR navigation.

The VOR MONs navigational capability will provide a nearly continuous VOR signal at altitudes at and above 5,000ft across the National Airspace System (NAS) and outside of the Western U.S. Mountainous Area (WUSMA). At lower altitudes, VOR coverage will exist but may not be continuous.

The VOR MONs network will reduce the number of operational VORs and published Victor airways mainly in the East and the Central United States. There is currently no plan to reduce or change the NAVAID and route structure in the WUSMA, which encompasses much of the United States' mountainous terrain.

By maintaining the current VOR route structure in mountainous areas, aircraft will still be allowed to navigate VOR airways where surveillance services are not available. Minimum En Route Altitudes (MEAs) will also be lower in these areas, allowing aircraft a more comprehensive selection for altitude options while encountering icing conditions.

Whom The VOR MON Applies To

The VOR MON primarily applies to IFR aircraft that are not equipped with DME/DME avionics.

In the event of a GPS outage, most part 121 and 135 air carriers will have DME/DME and Inertial Reference Units to allow point-based navigation during a GPS disruption. However, large carriers will still be able to use the VOR MON if they wish. 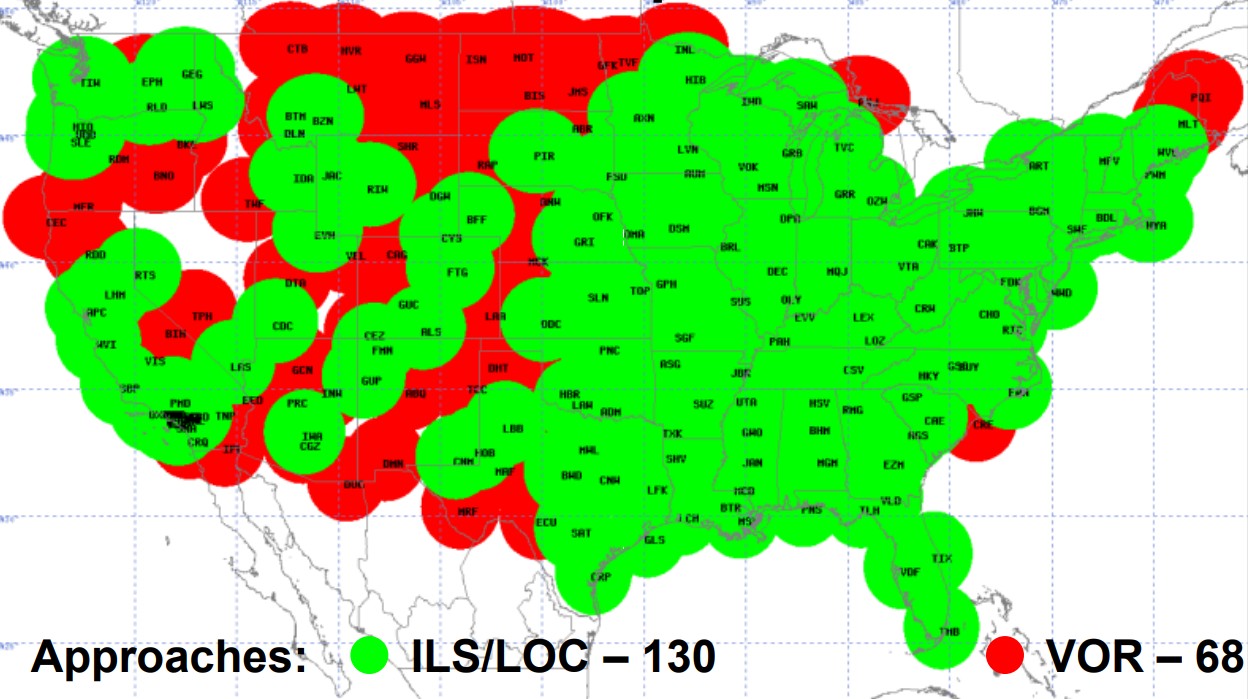 The creation of the VOR MON will also create the MON airport.

A MON airport will ensure that a pilot will always be within 100nm of an airport with an instrument approach not dependent on GPS.

Approaches at MON airports will include at least one VOR, ILS, or LOC approach. Pilots will not require their aircraft to be equipped with DME, ADF, Surveillance, or GPS to navigate to a MON airport.

If a pilot were to encounter a GPS outage, the pilot would be able to navigate via VOR to VOR navigation at 5,000ft AGL through the area of GPS outage. The pilot could also elect to land at a MON airport or other suitable airport as appropriate.

The MON designation alerts pilots to airports that have retained ILS and VOR instrument approach procedures for safe recovery in a GPS outage event.

The VOR MON is designed to be a reversionary service provided by the FAA for use by aircraft unable to continue RNAV during GPS outages.

During unscheduled GPS outages, pilots and ATC will need to work together to get the best outcome for all aircraft. GPS outages could be disruptive, causing high workload and demand for air traffic control and pilots alike.

In the event of a GPS, outage pilots may coordinate with ATC and elect to continue through the outage or land. MON airports may ensure that an aircraft is within 100 NM of an airport, but pilots can proceed to any appropriate airport where a landing can be made.

Part 91 operators will not be required to carry VOR avionics in addition to their WAAS equipped aircraft. However, aircraft only equipped with WAAS avionics will not have the ability or requirement to use the VOR MON. Proper flight planning should consider the possibility of a GPS outage.

The FAA has currently not mandated that preflight or inflight planning include provisions for GPS or WAAS equipped aircraft to carry sufficient fuel to proceed to a MON airport in case of an unplanned GPS outage. Flying to a MON airport as a filed alternate will not be explicitly required. However, pilots should keep in mind that flying using the VOR MON may result in longer routes requiring more fuel than flying a GPS enabled RNAV route.

Pilots should keep in mind the possibility of a GPS outage during their preflight planning and maintain a high proficiency level with VOR navigation. Many non-GPS based approaches will also be eliminated. Most airports may only have instrument approaches based around GPS and WAAS. This presents the risk pilots will not be proficient in flying a VOR or ILS approach in a GPS outage event. Therefore, pilots should take due diligence to retain proficiency with non-GPS based approaches. 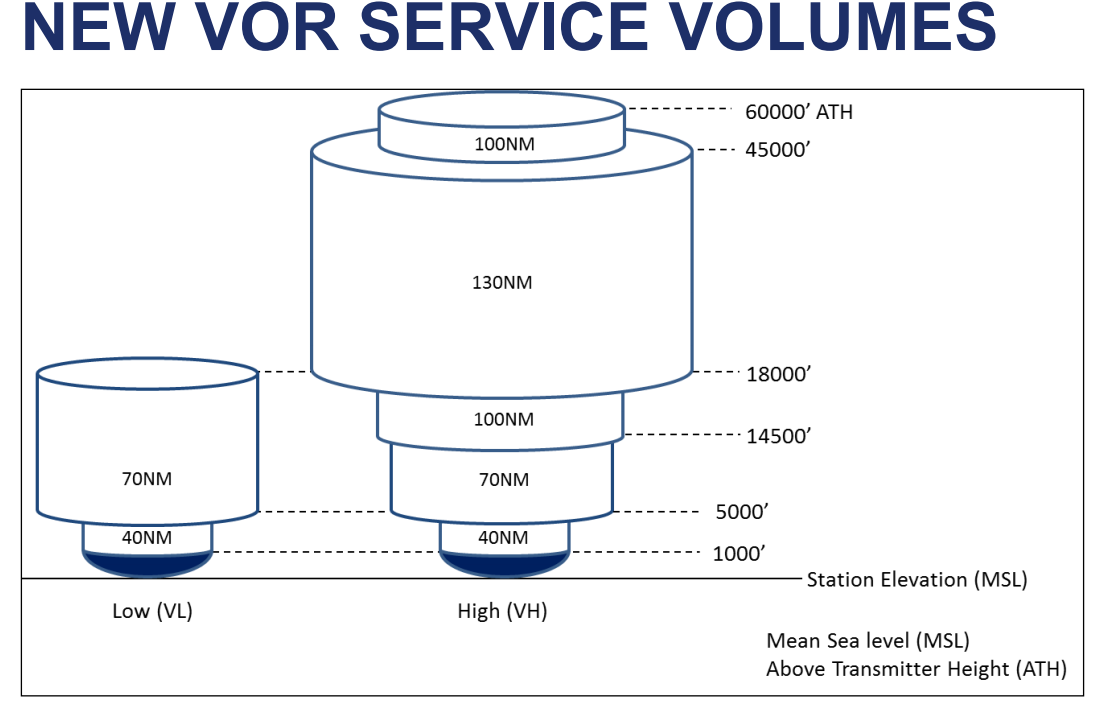 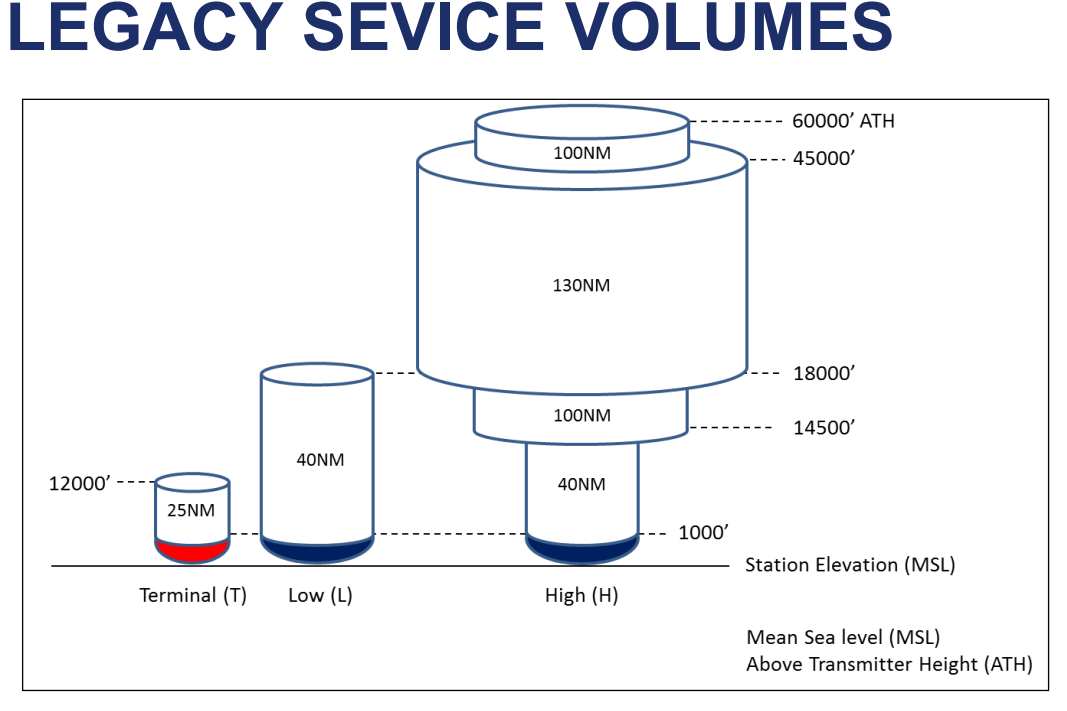 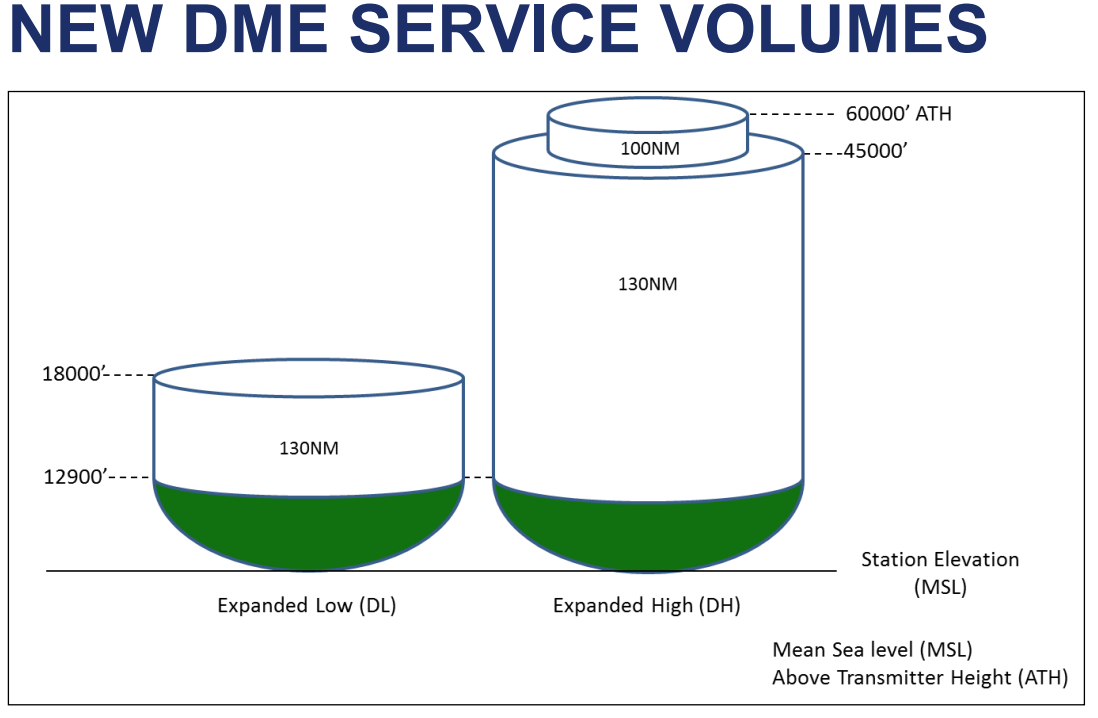 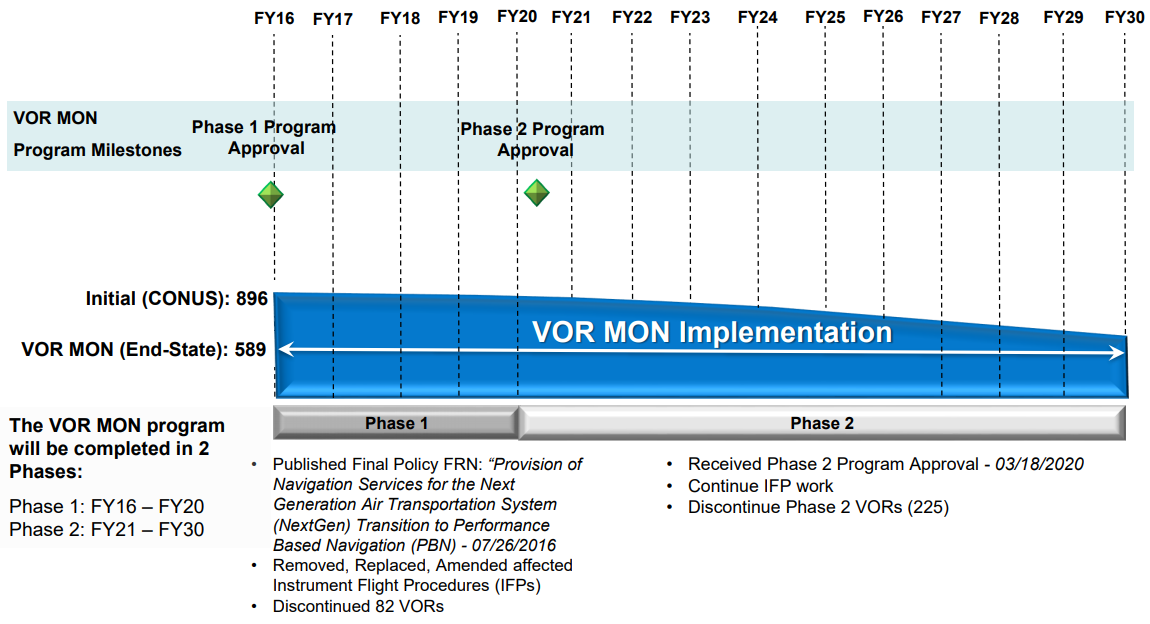 Going forward, the VOR MON program is inevitably going to have more changes and requirements. The total amount of VORs being decommissioned and the airports that will serve as MON airports is not set in stone. Many changes have already occurred and will continue to occur.

However, it is clear that the robust network that current VORs have given pilots will no longer exist under the VOR MON program. The VOR MON will instead be an operational contingency and serve as a backup for lower end GA IFR aircraft in the event of a widespread GPS outage. The VOR MONs true intention is to give users time to equip with new avionics in the transition to RNAV and RNP methods of navigation. In this sense, the VOR MON is in itself a transitional network of VORs.

The best we can do is stay informed and keep up to date with the future of America's National Airspace System and those that operate within it.