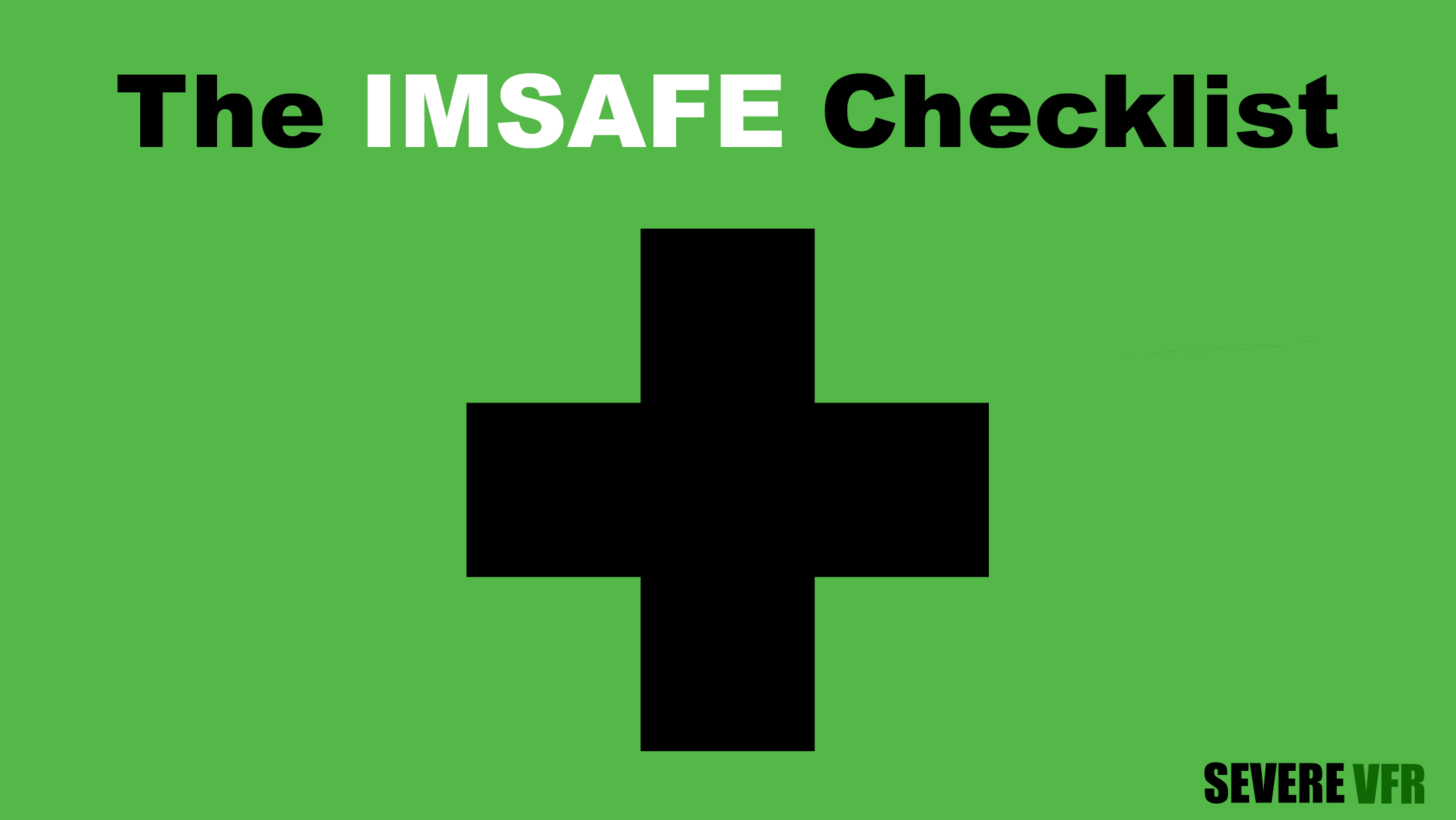 The IMSAFE checklist is a personal checklist to help pilots determine if they are physically, mentally, and emotionally ready to perform the duties of flight.

The personal checklist is remembered with the IMSAFE acronym:

The IMSAFE checklist should be performed before every flight as part of the pre-flight briefing. 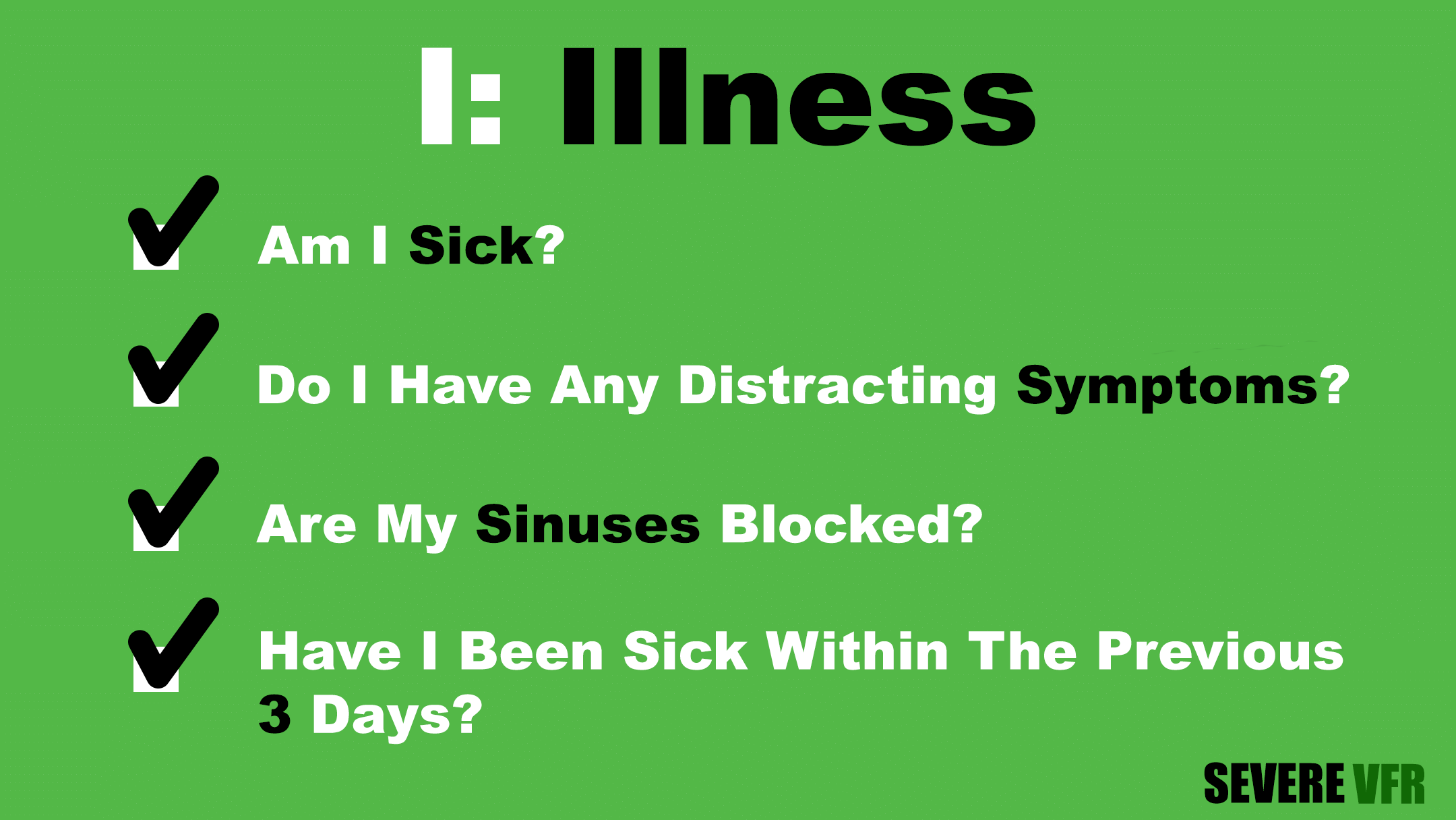 An individual is deemed unfit to fly if they have any illness such as the flu or common cold.

Being sick while inflight can cause a build-up of sinus pressure in the nose, forehead, and ears. This pressure can and will lead to extreme pain or ruptured eardrums due to air in the sinuses being unable to equalize with the changing outside air pressure.

Most illnesses also possess distracting symptoms such as coughs, migraines, vomiting, and diarrhea and distract a pilot from flying the airplane.

A pilot should ask themselves: 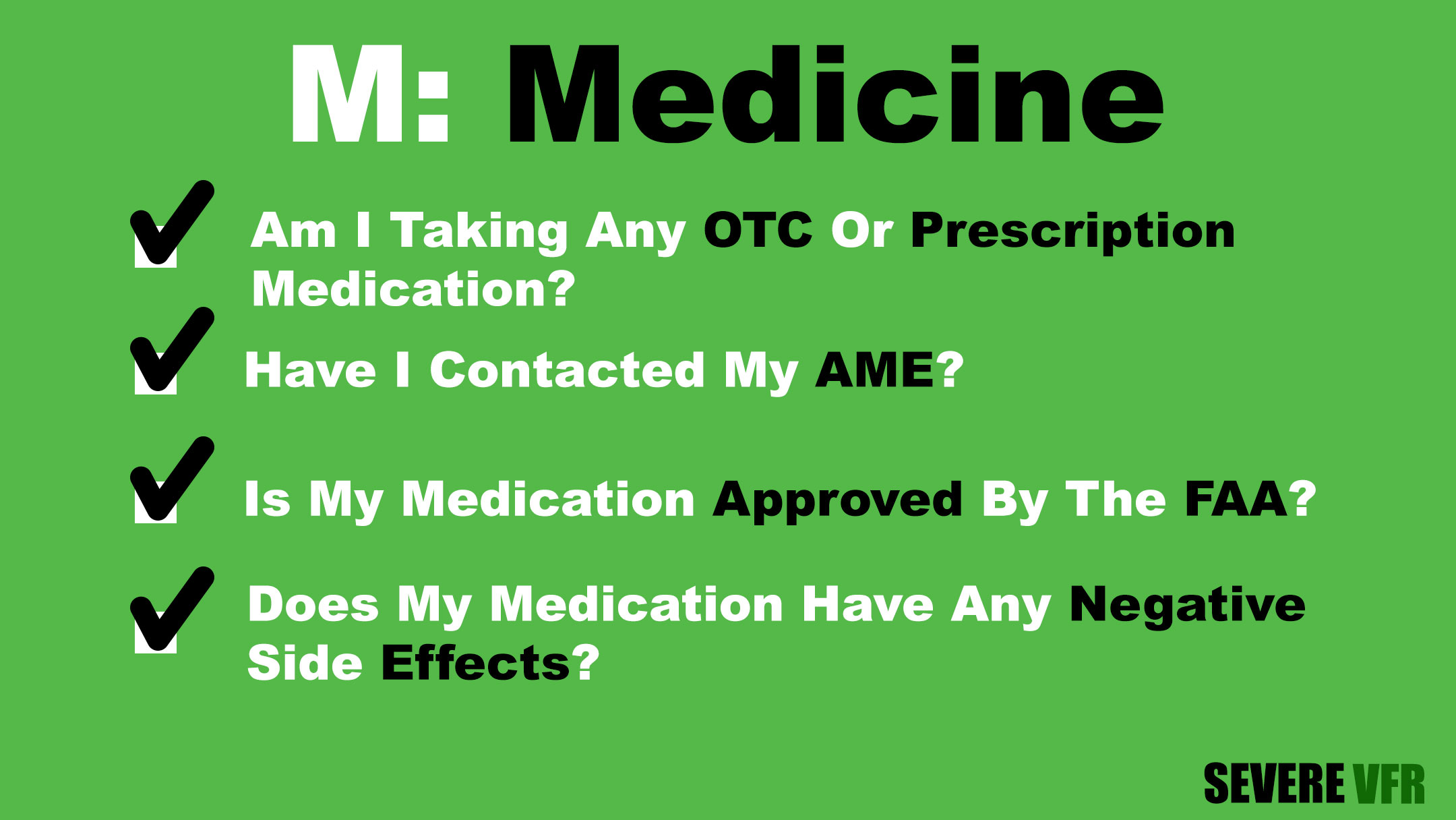 Many types of medications can cause many adverse side effects detrimental to the safety of flight. Other drugs end up reacting differently in the body with supplemental oxygen and low oxygen environments. Both of which can be found in the flight environment.

It is generally considered best practice to avoid flying while taking any medication regardless if the medication is prescribed or over the counter.

However, some medications cannot be avoided for health reasons. If this is the case, an aviation medical examiner (AME) needs to be contacted to determine if the medication is safe to fly while being taken.

The FAA provides lists of all AME's and how to contact them here.

A pilot should ask themselves:

If the answer is yes or not an affirmative no, contact and ask an AME. Many medications are safe to fly with, and many are not. The only way to know for sure is to ask. 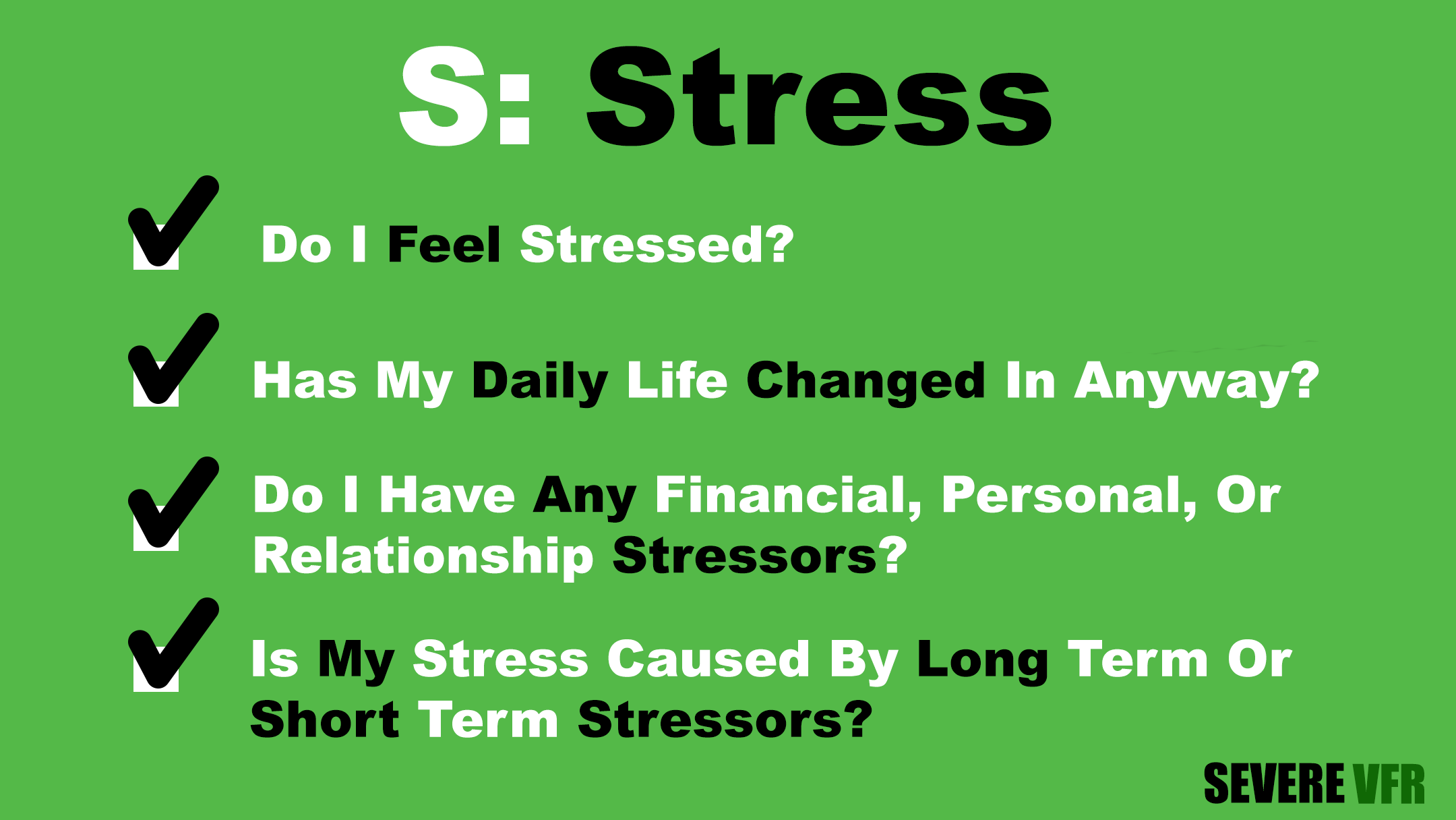 Stress is the body's response to physical and psychological demands placed upon it.

A pilot should worry about bringing outside causes of stress, or stressors, into the cockpit.

When a pilot brings additional stress into the cockpit, other stressors caused by an aircraft's operation can result in the pilot becoming task saturated.

Task saturation is the point where stress overcomes the pilots' abilities. If a pilot becomes task saturated, they will lose all ability to perform and function.

To avoid becoming task saturated, a pilot should ask themselves: 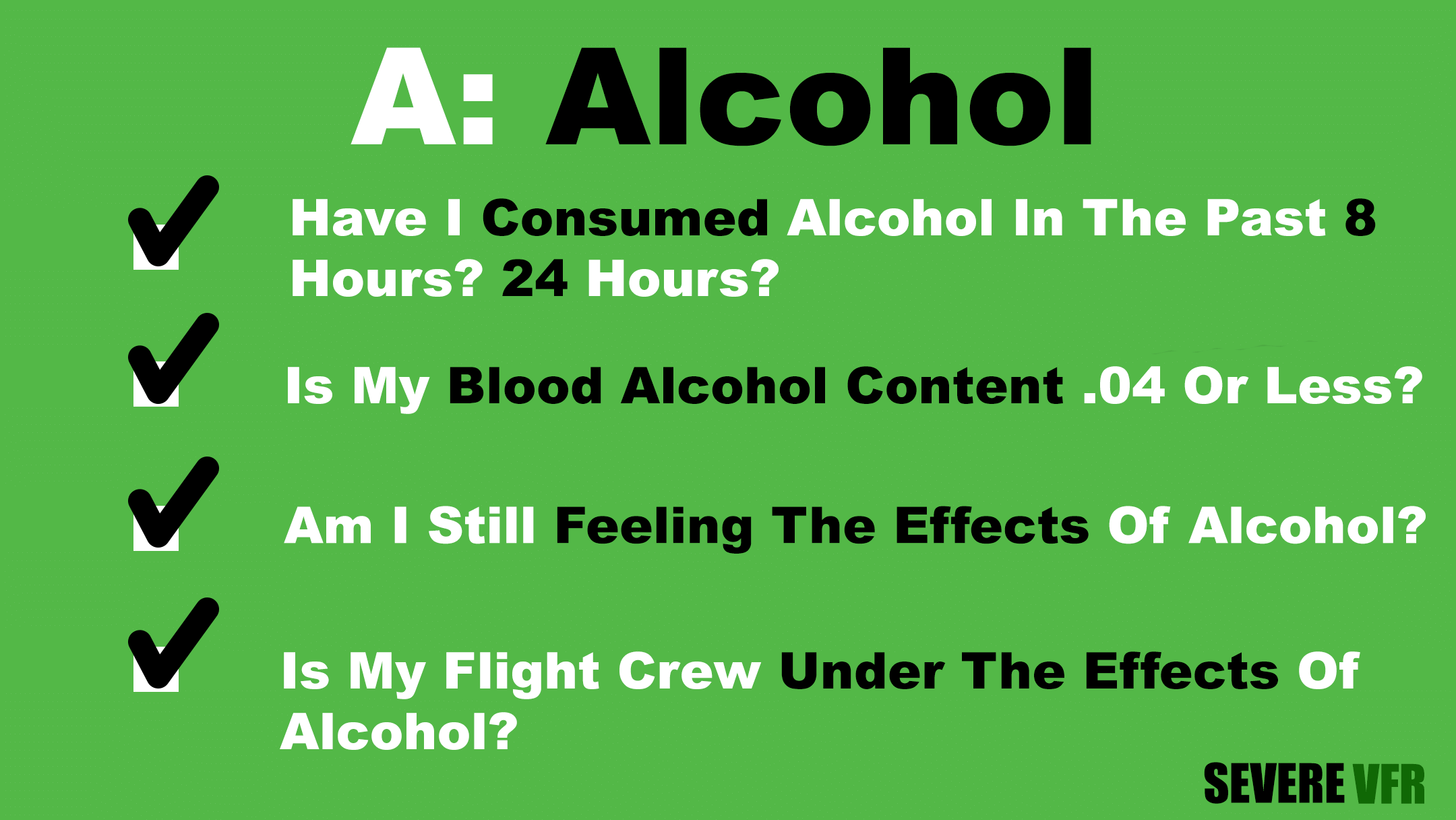 Alcohol reduces a person's motor skills, judgment, and general ability to make good decisions. It should go without saying, but flying while under any influence is not acceptable. Not only is it not safe, but it is also the quickest way for a pilot to lose all their certificates and ratings.

This rule also applies to the passengers onboard the aircraft. No passenger can be under the influence of any drug or alcohol unless they are under the direct supervision of medical care.

14 CFR 91.17 states that no person may act or attempt to act as a crew member of a civil aircraft within 8 hours of consuming any alcoholic beverage while having a blood alcohol content greater than .04 or while still feeling the effects of alcohol.

While the regulation states 8 hours, it is considered best practice to wait 24 hours before flying after consuming alcohol.

Before every flight, ask yourself: 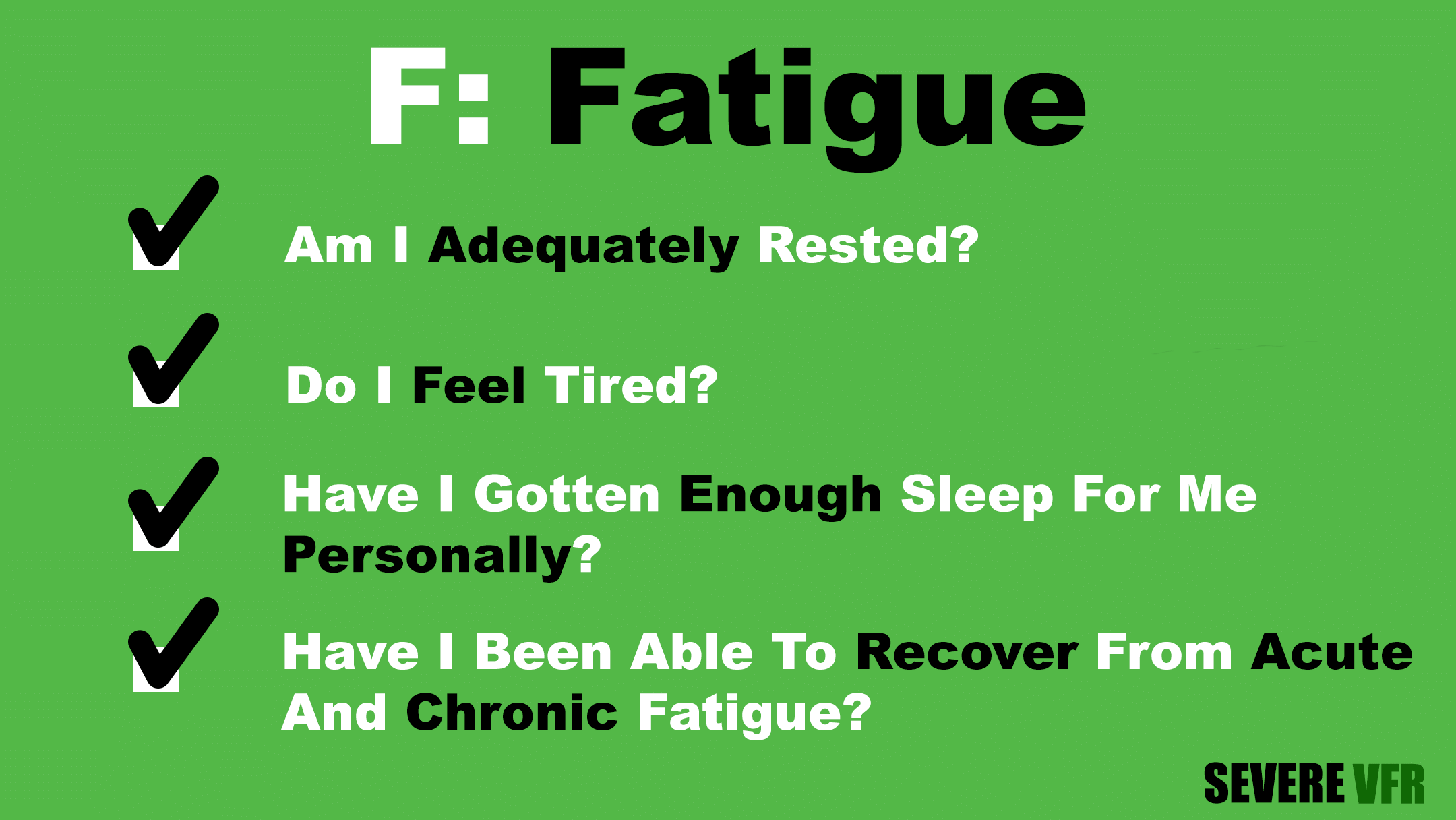 Fatigue is a feeling of constant tiredness or weakness and can be physical, mental, or a combination of both and remains one of the most significant hazards to flight.

Fatigue generally goes along with stress. Any person with fatigue will have trouble concentrating, have a decreased reaction time, and overall have a general decrease in performance.

Multiple studies have shown that individuals will consistently under-report how tired they are. Individuals also do not realize how impaired they are and the degree of performance loss they are experiencing.

A pilot may not realize how fatigued they are until a serious incident or event occurs. 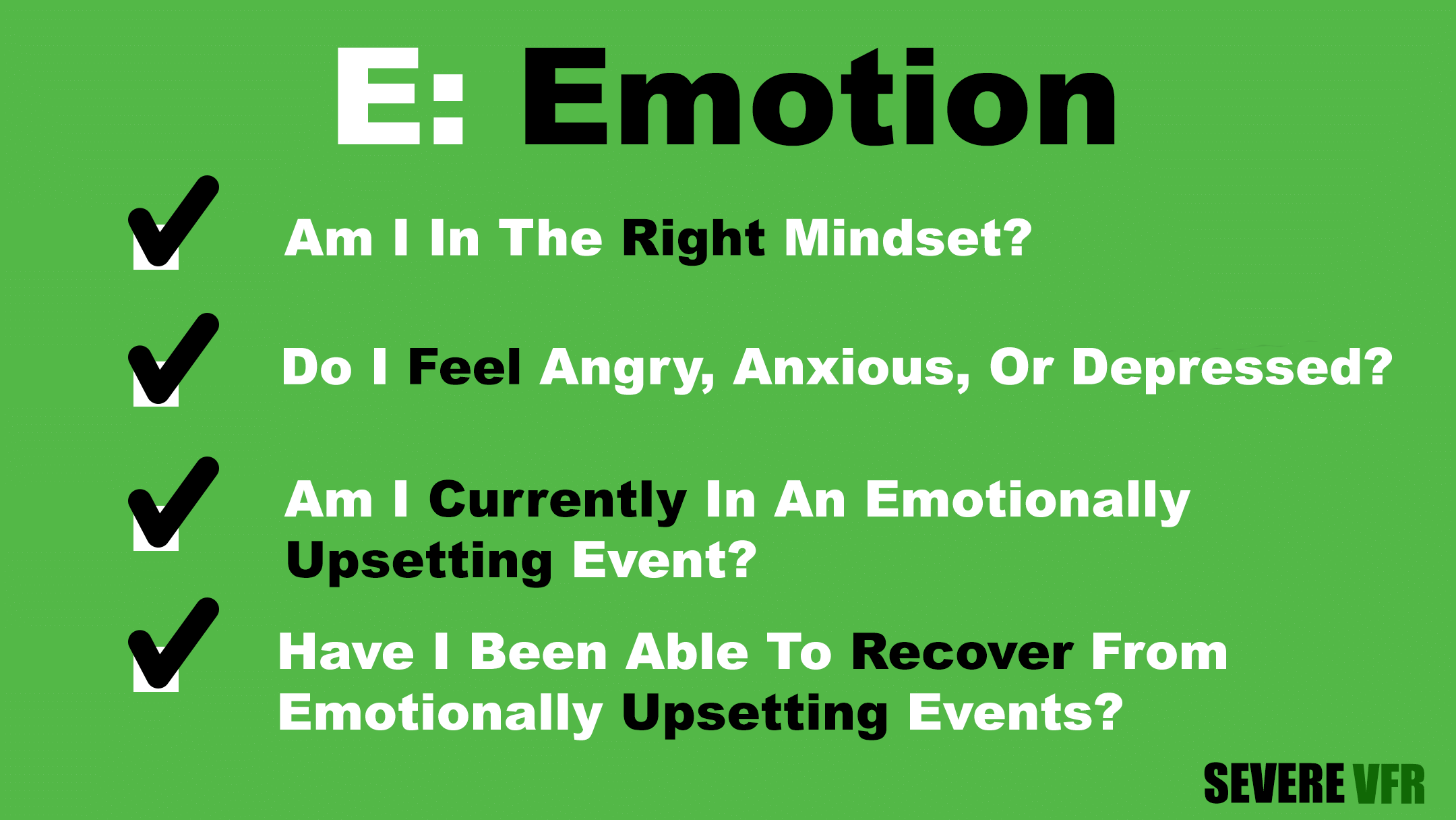 Being in a fragile emotional state is not safe for flight.

A pilot should be in a clear frame of mind to make good decisions and act rationally.

Being emotionally upset can result in irrational decisions, poor performance, and a decrease in decision making.

Emotions would also fall under the category of get-there-itis, the pilot's determination to reach a destination even when flying conditions are hazardous.