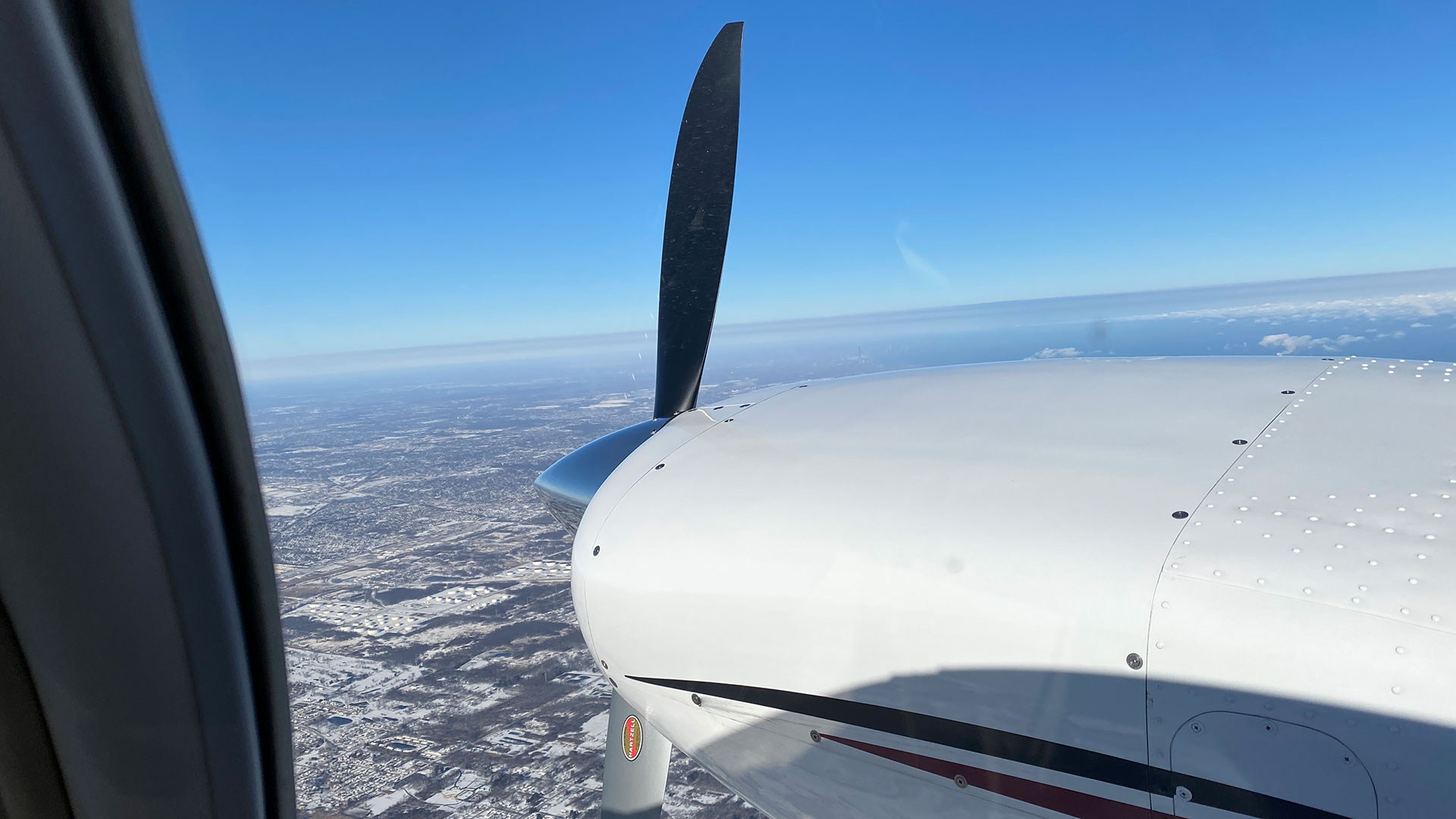 What Is A Zero Sideslip? 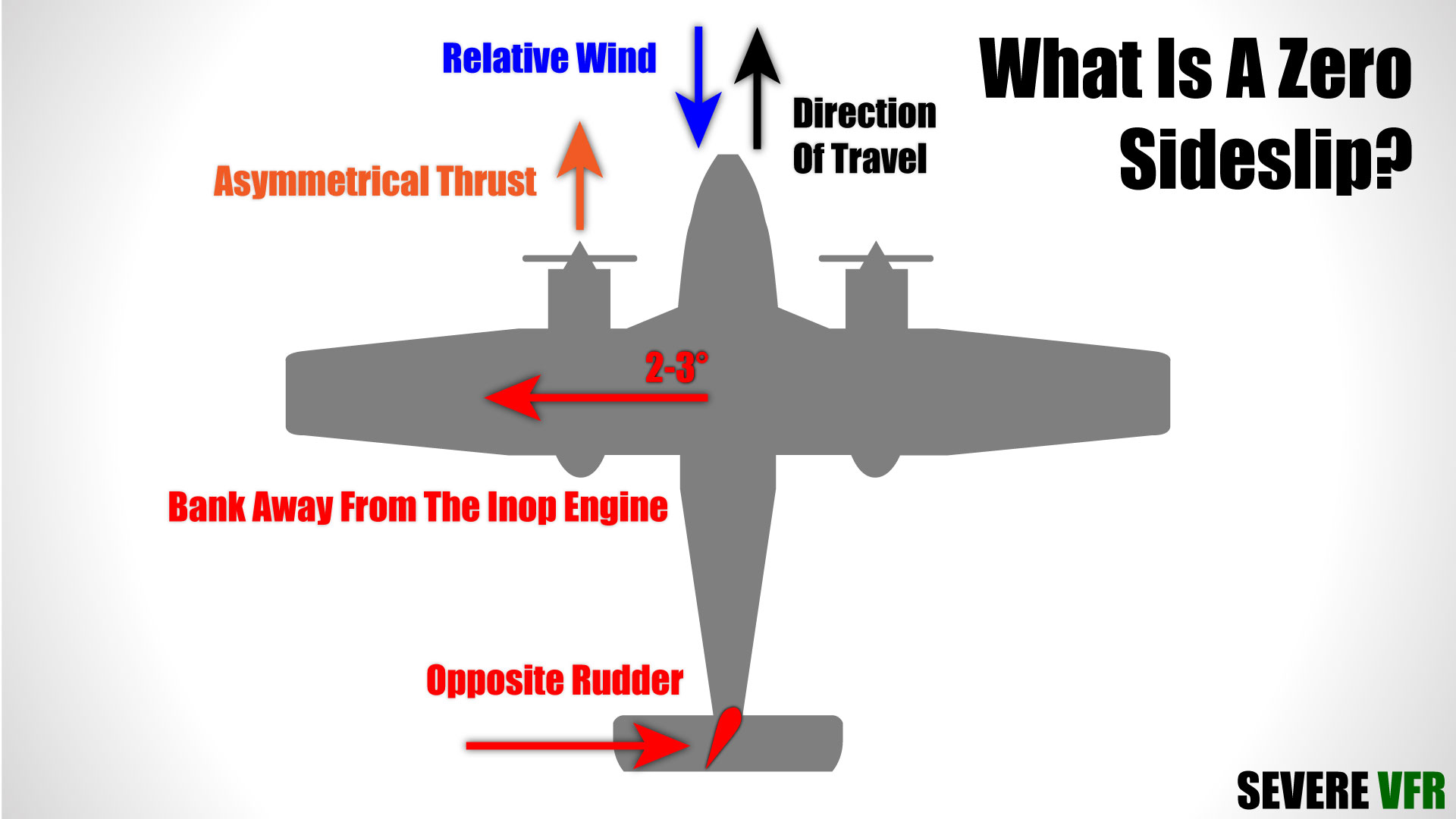 A pilot must enter and maintain a zero-sideslip during an engine failure in a multi-engine aircraft to achieve the greatest climb performance possible while still maintaining control of the aircraft.

While performing a zero-sideslip, the pilot will input rudder and aileron to counteract the aircraft's tendency to enter a sideslip. Therefore, reducing the aircraft's drag and allowing the greatest performance.

What Happens If Only Rudder Is Used 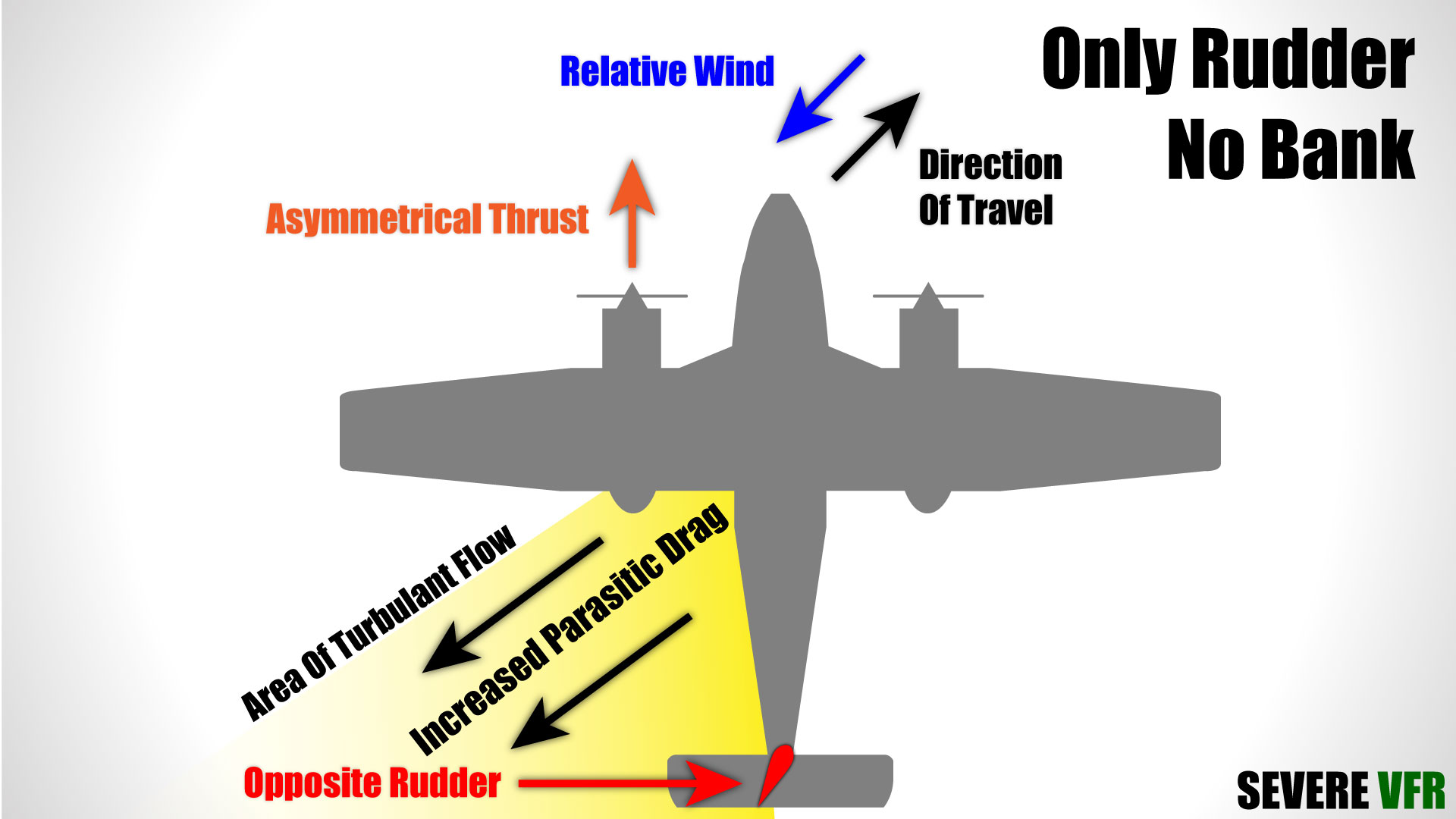 During an engine failure, a pilot that only uses the rudder to maintain directional control of the aircraft will enter into a sideslip to the left or the right, depending on the engine that has failed.

In the example shown above, the aircraft has a right engine failure. In this case, the pilot is applying full left rudder to compensate for the resulting right yaw. 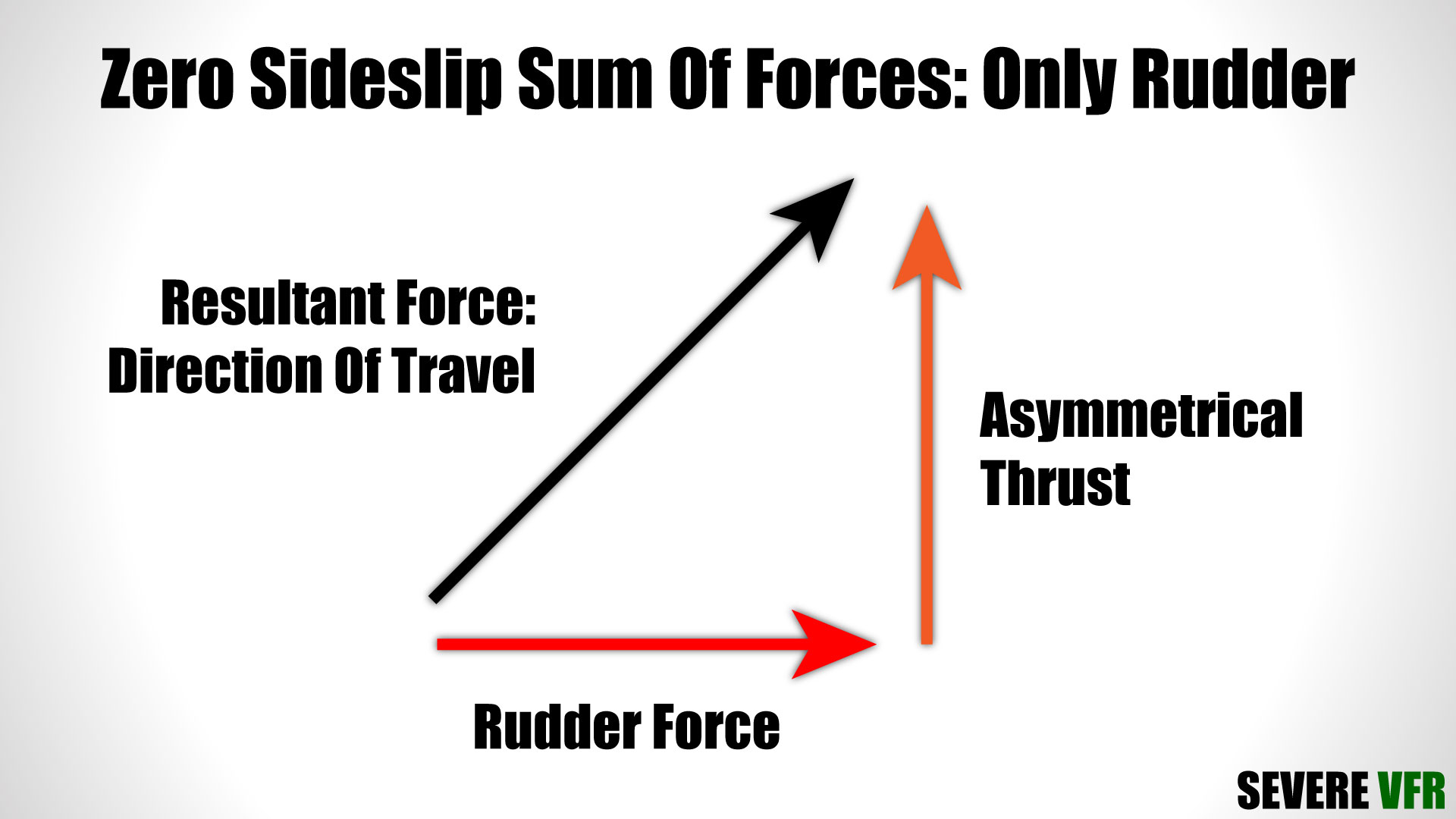 The aircraft's direction of travel is skewed left or right due to the sum of forces acting on the aircraft.

In this case, the combination of the forward thrust produced by the still-functioning left engine and the left rudder force created by the rudder creates a resultant force towards the right.

This right resultant force ultimately determines the aircraft's direction of travel and subsequently the relative wind's path across the aircraft surface.

What Happens If Only Bank Is Used 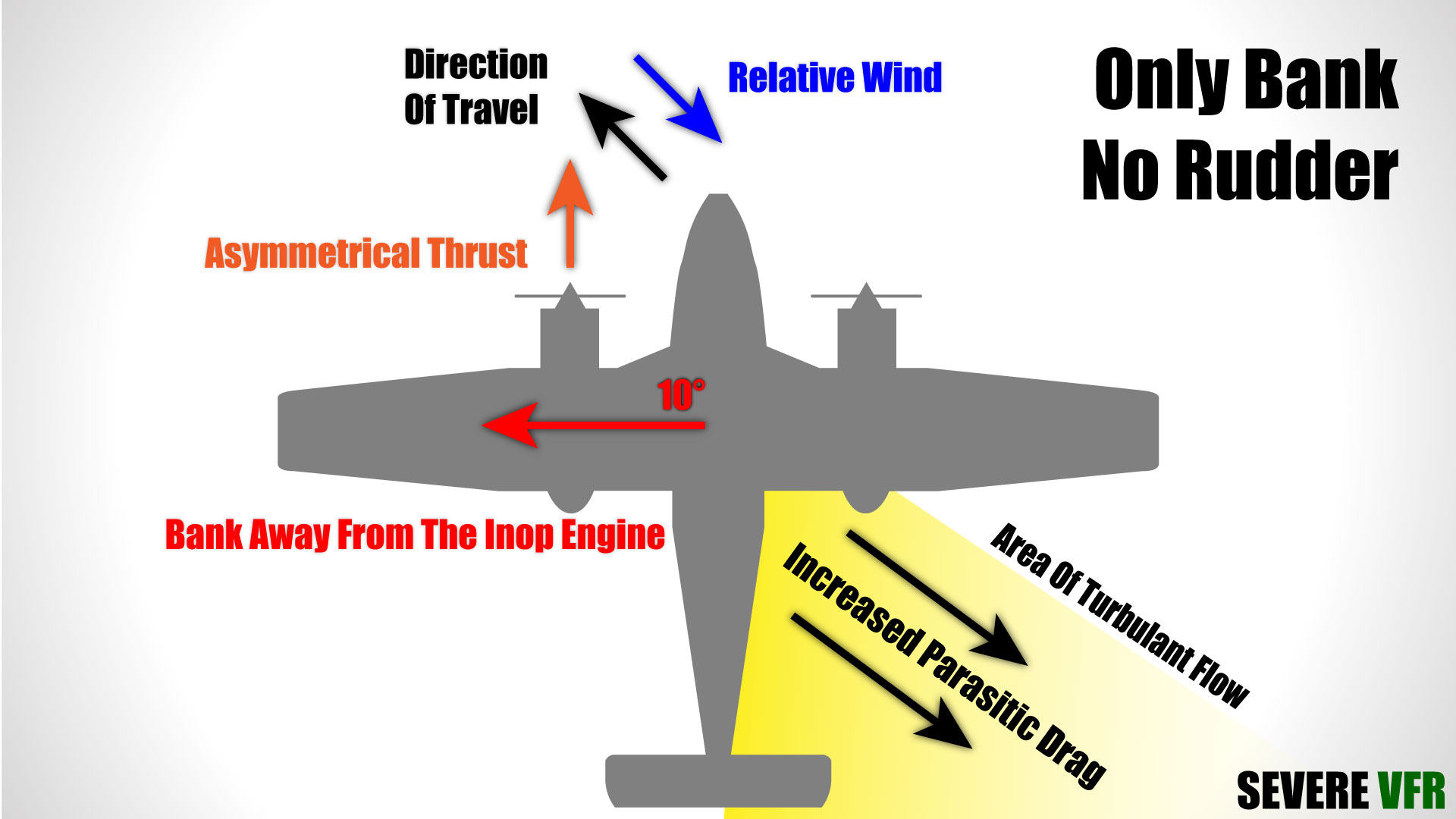 Using the horizontal component of lift produced by an aircraft's wing in a bank to counteract the yawing motion created by the remaining engine is theoretically possible. However, the amount of bank required to produce the horizontal force required is dependent on multiple external factors and would most likely occur at higher bank angles.

With that being said, if the pilot only inputted bank to counteract the uncommanded yaw created by the remaining engine, the aircraft would enter a sideslip in the other direction. In this example, the sideslip would be towards the left with the right engine failure.

Similar to only using rudder, this area of turbulent flow results in an increase of parasitic drag, eliminating any potential climb performance. 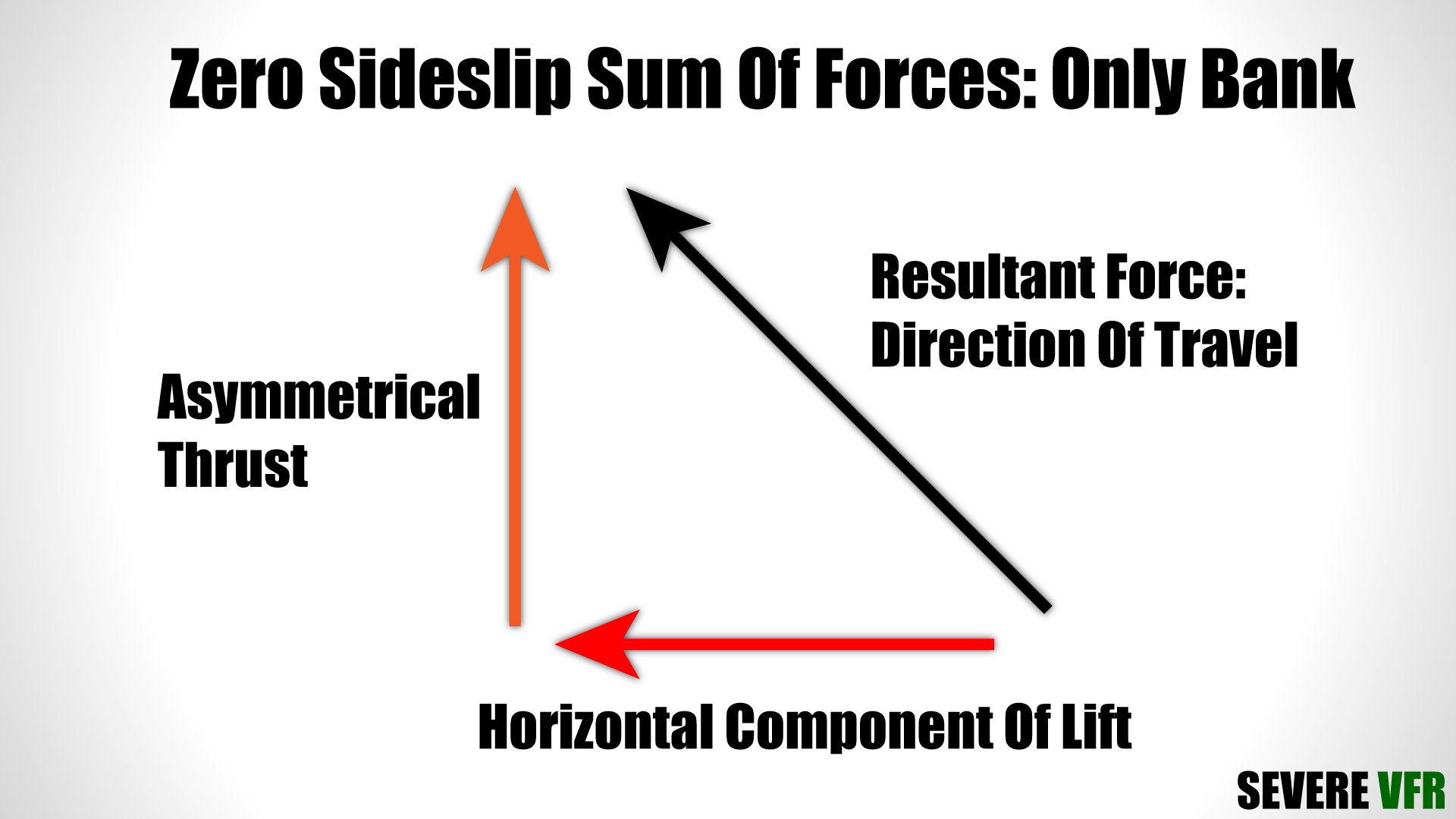 While only using bank, the combination of forward thrust produced by the remaining engine and the horizontal component of lift creates a resultant force towards the left.

Like the resultant right force created while only using rudder, the left resultant force results in the aircraft's direction of travel to be towards the left and the relative wind to also come from the left. 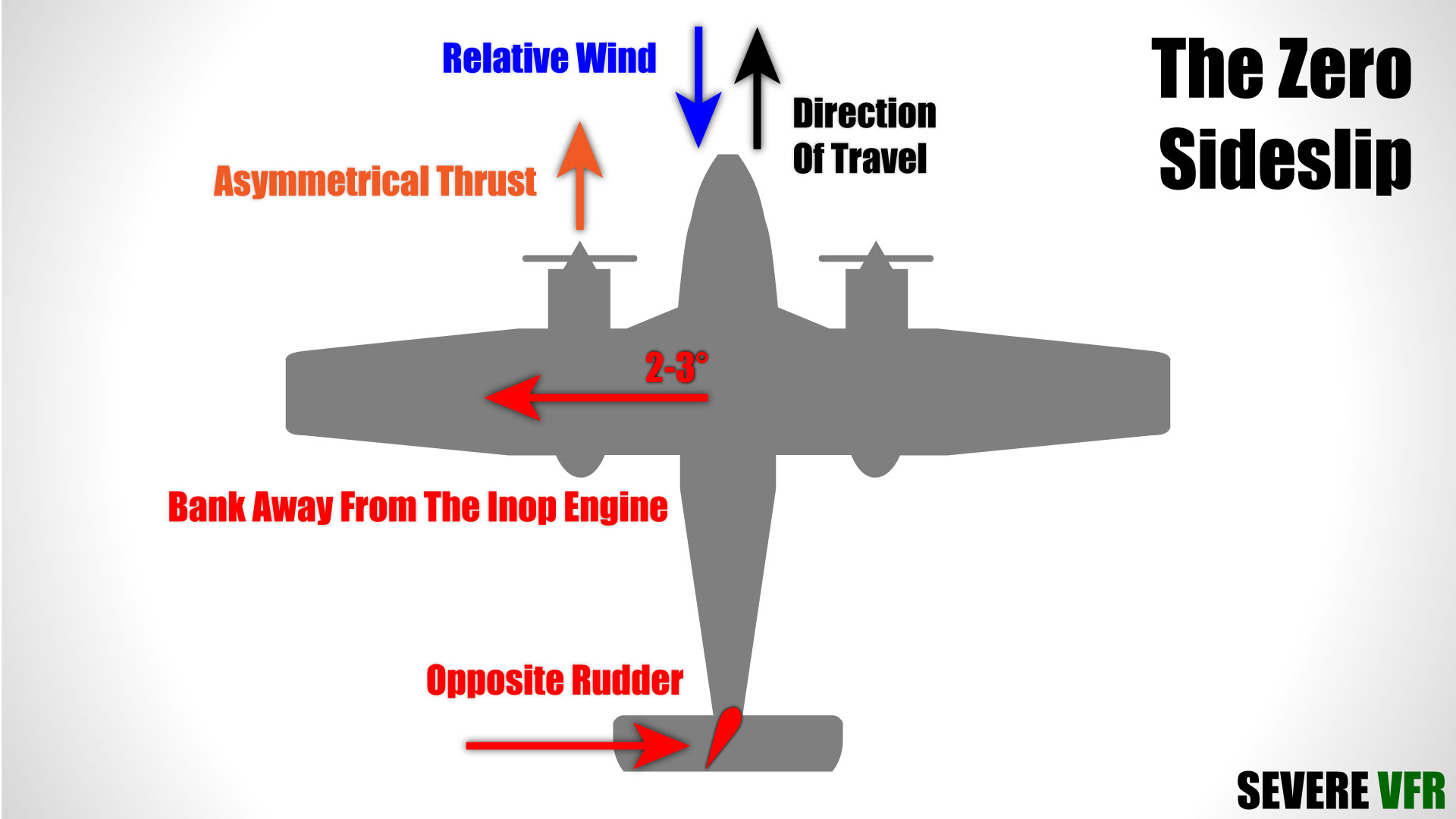 The only way to maintain directional control of a multi-engine aircraft during an engine failure and get the greatest amount of performance is through the zero-sideslip.

The end result is the ability to maintain control of the aircraft during an engine failure and the elimination of parasitic drag - allowing the greatest possible climb performance.

The reason bank and rudder need to be used to enter a zero-sideslip is that the rudder and horizontal component of lift forces cancel out, leaving only the forward thrust produced by the remaining engine to have any effect on the aircraft.

As shown above, during a right engine failure, the pilot will initially apply left rudder to maintain control of the aircraft. This will result in a force being applied to the left of the rudder, pushing the tail to the right. At this point, the pilot is in a sideslip towards the right while only using rudder.

The pilot will then enter a zero-sideslip by inputting approximately 2-3 degrees of bank towards the operating engine, effectively canceling the right rudder force.

This leaves the pilot in a zero sideslip, with only the forward thrust produced by the remaining engine having any actual effect on the aircraft's direction of travel.