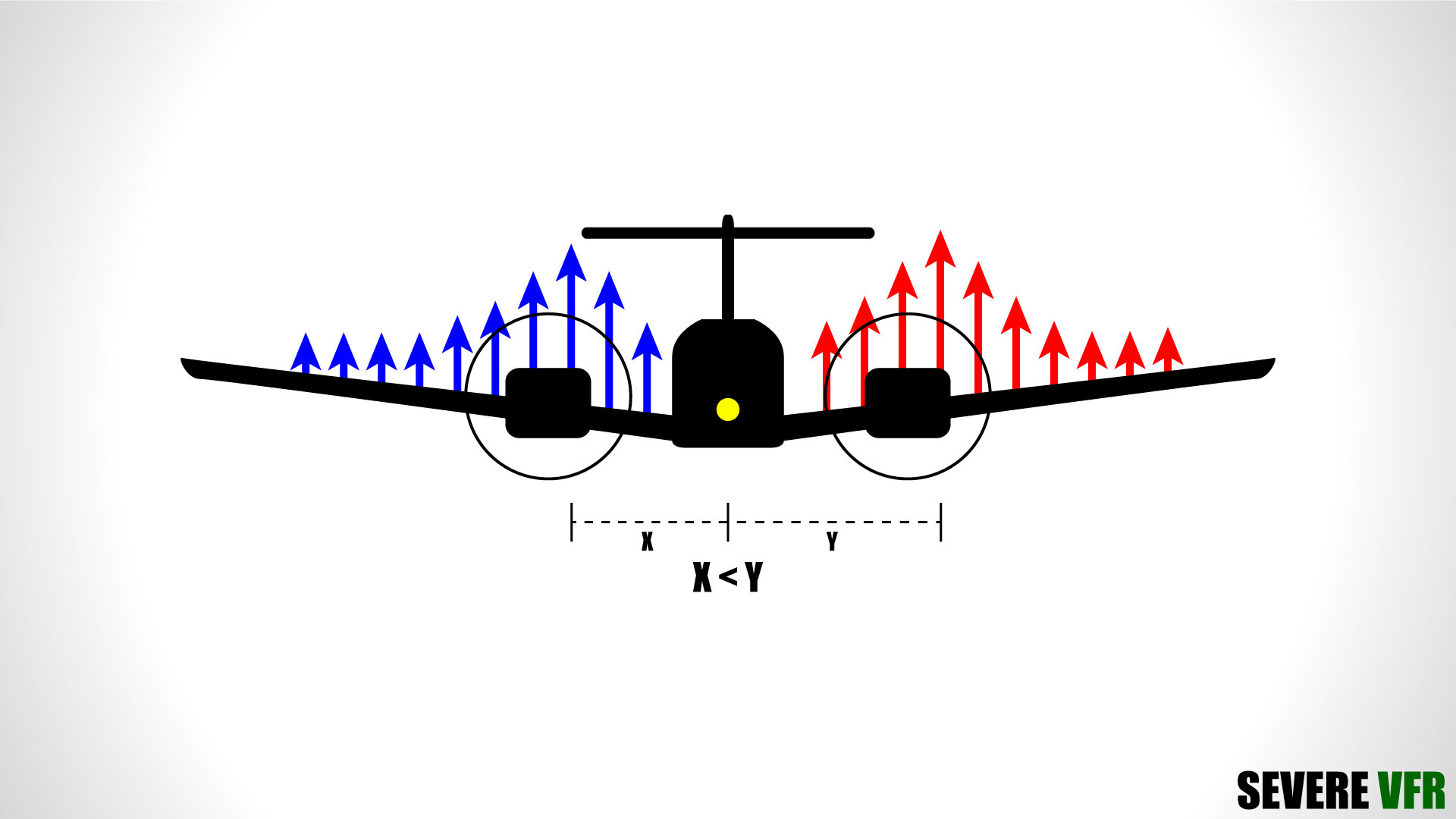 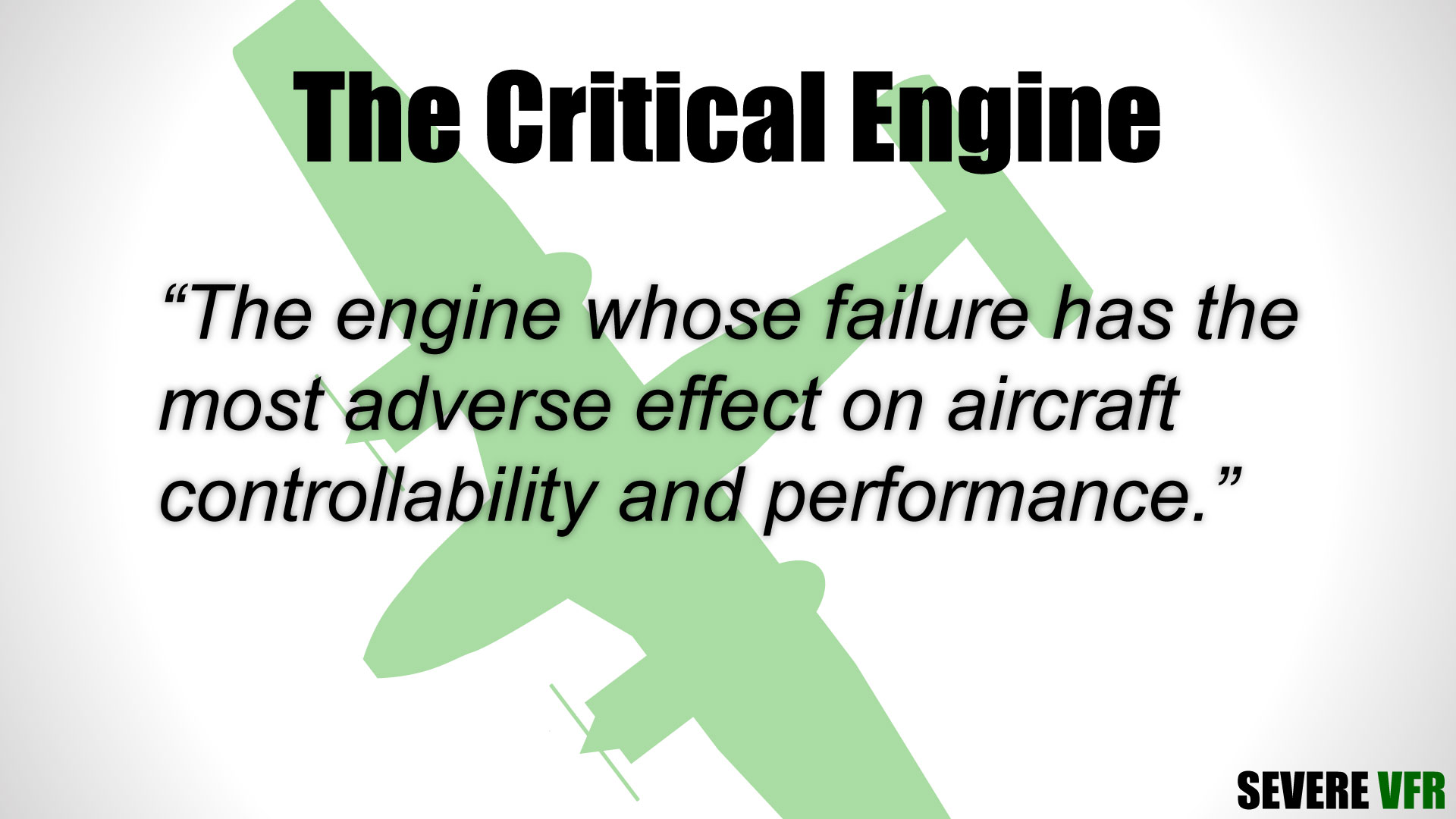 The critical engine on a multi-engine aircraft is the engine whose failure will result in the most adverse effects on aircraft performance and controllability.

On conventional twins, where both props rotate clockwise when viewed from the pilot seat, the engine that is deemed critical is the left engine. If the left engine is failed, a multi-engine aircraft will suffer a greater reduction in performance and controllability when compared to the right engine failing. 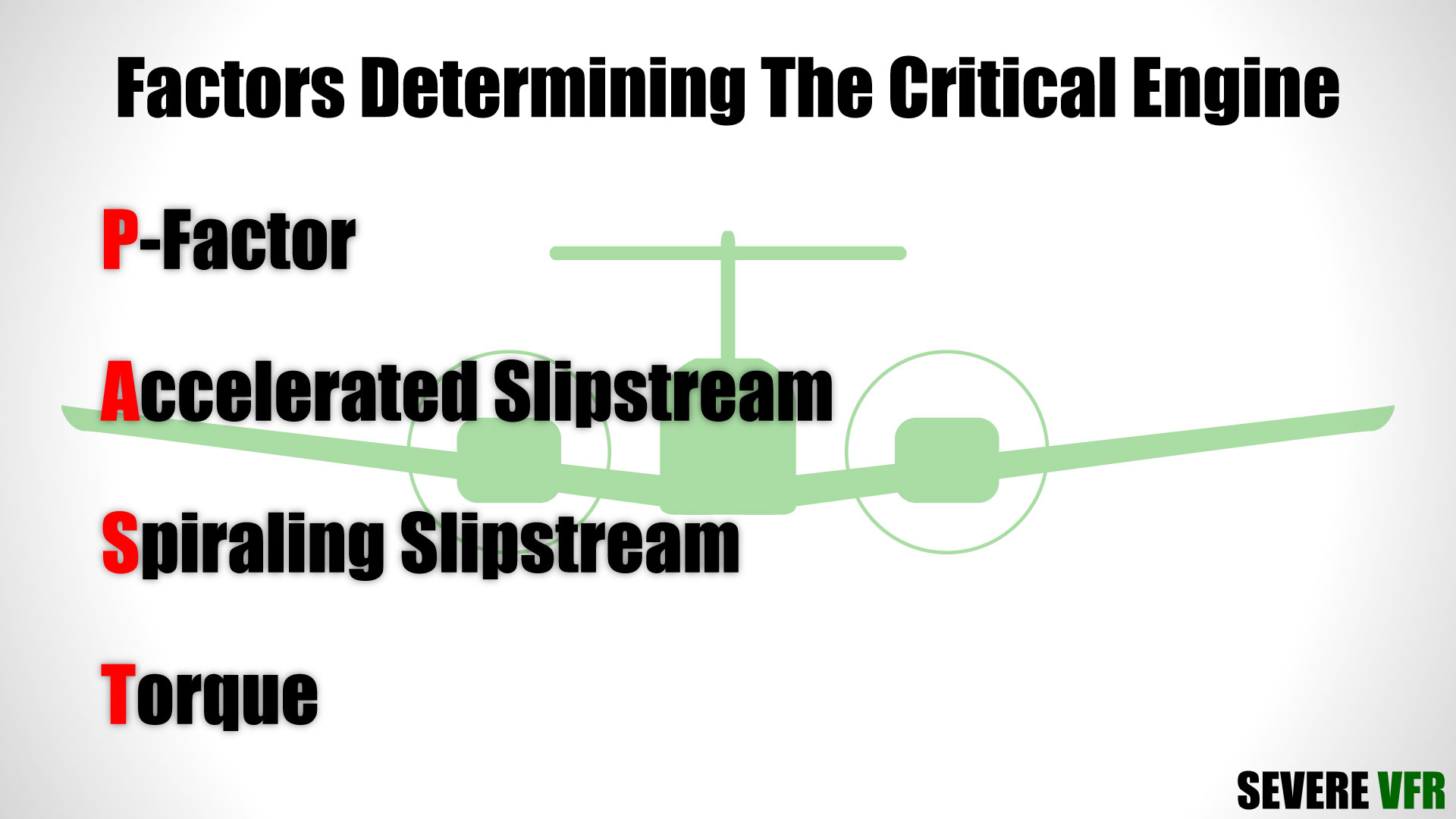 The four-factor that determine the critical engine is remembered with the P.A.S.T. acronym and includes 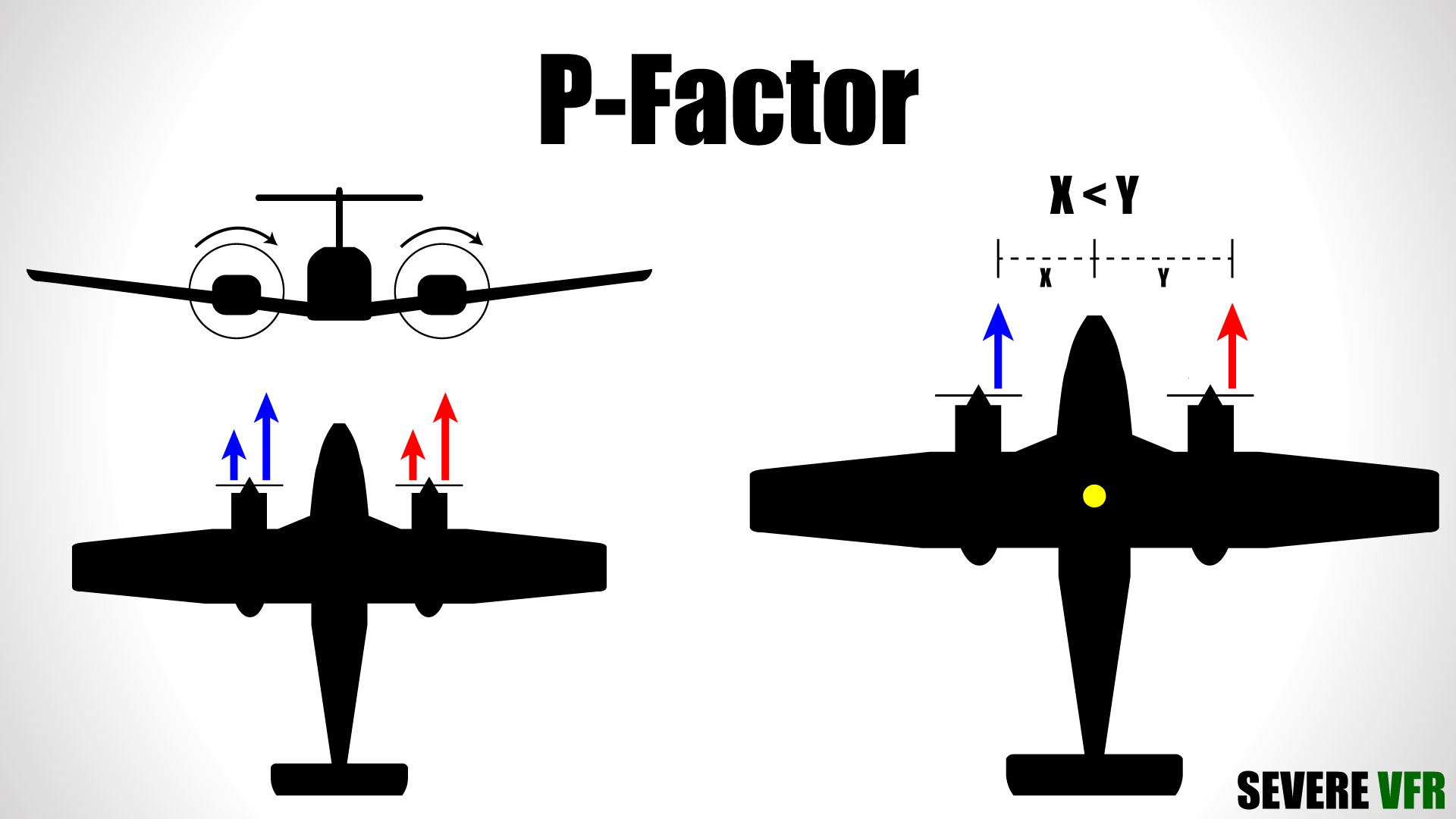 On a conventional multi-engine aircraft, P-Factor causes the centerline of thrust on the right engine to be slightly further from the aircraft's center of gravity when compared to the left engine. This difference in distance, or arm, from the center of gravity results in P-Factor causing a lesser or greater amount of uncommanded yaw dependent on the engine that has failed. Therefore making P-Factor a controllability factor. 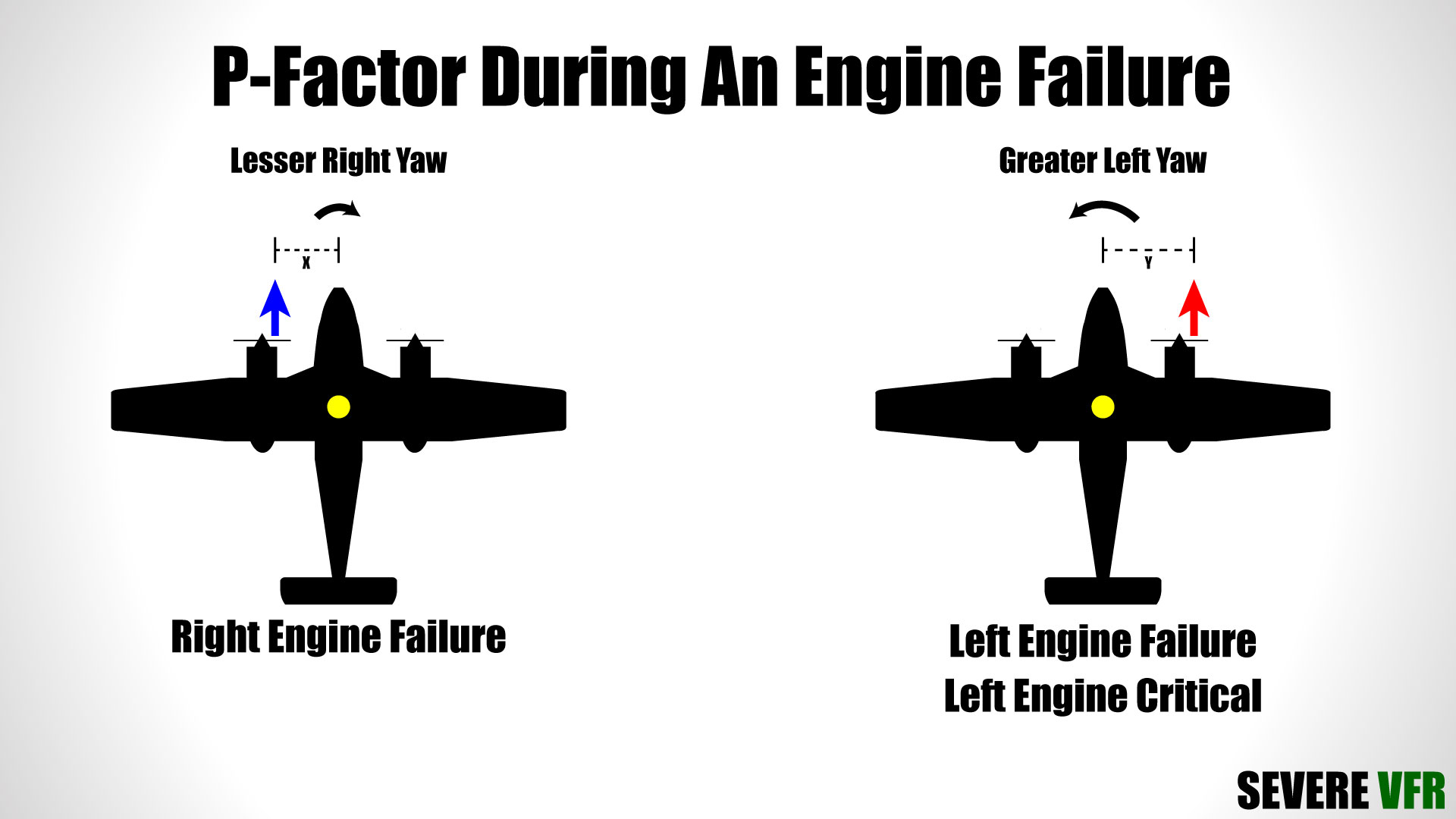 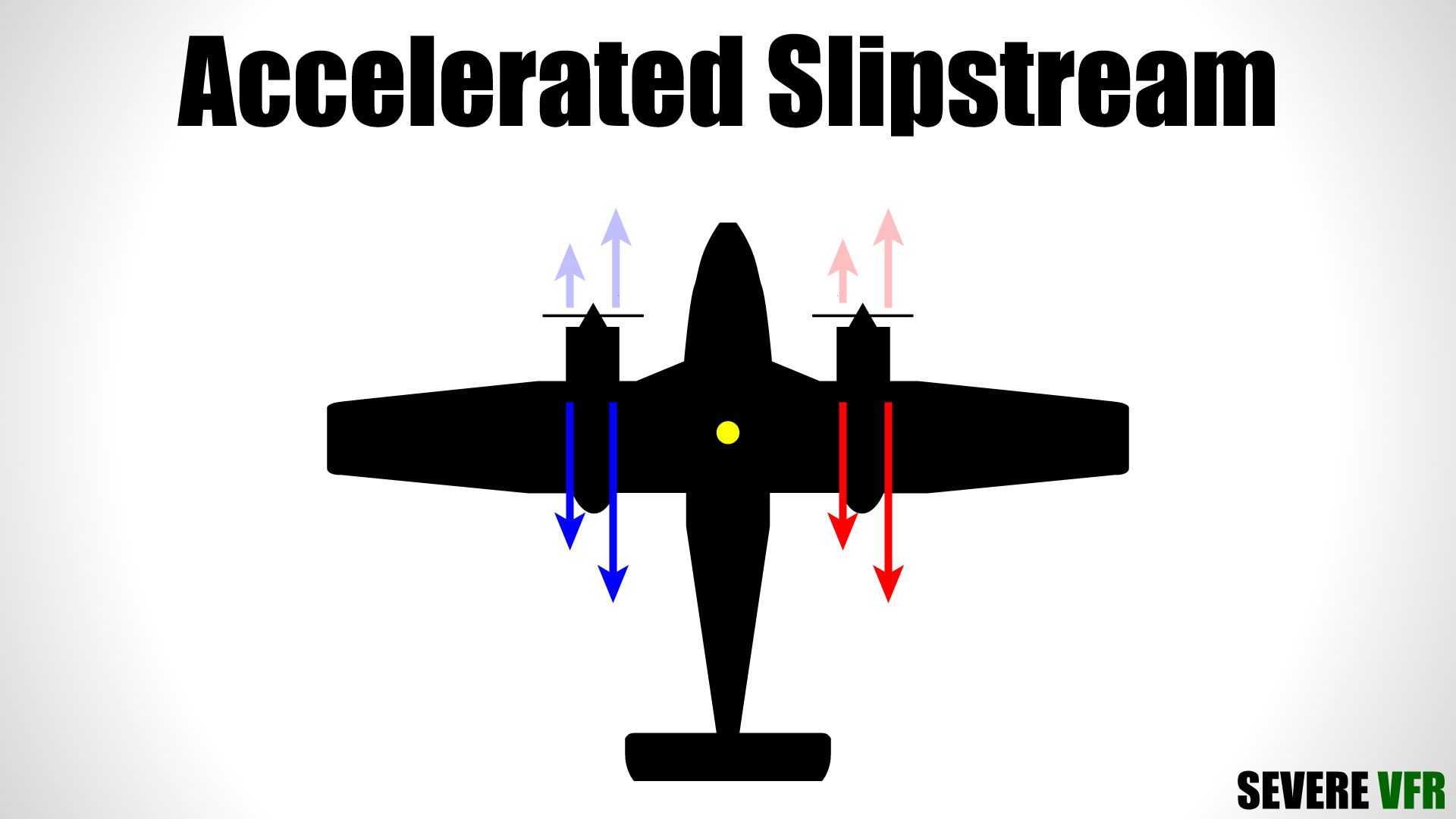 A byproduct of the uneven foreword thrust produced by P-Factor is two areas of airflow behind each propeller with differing velocities. 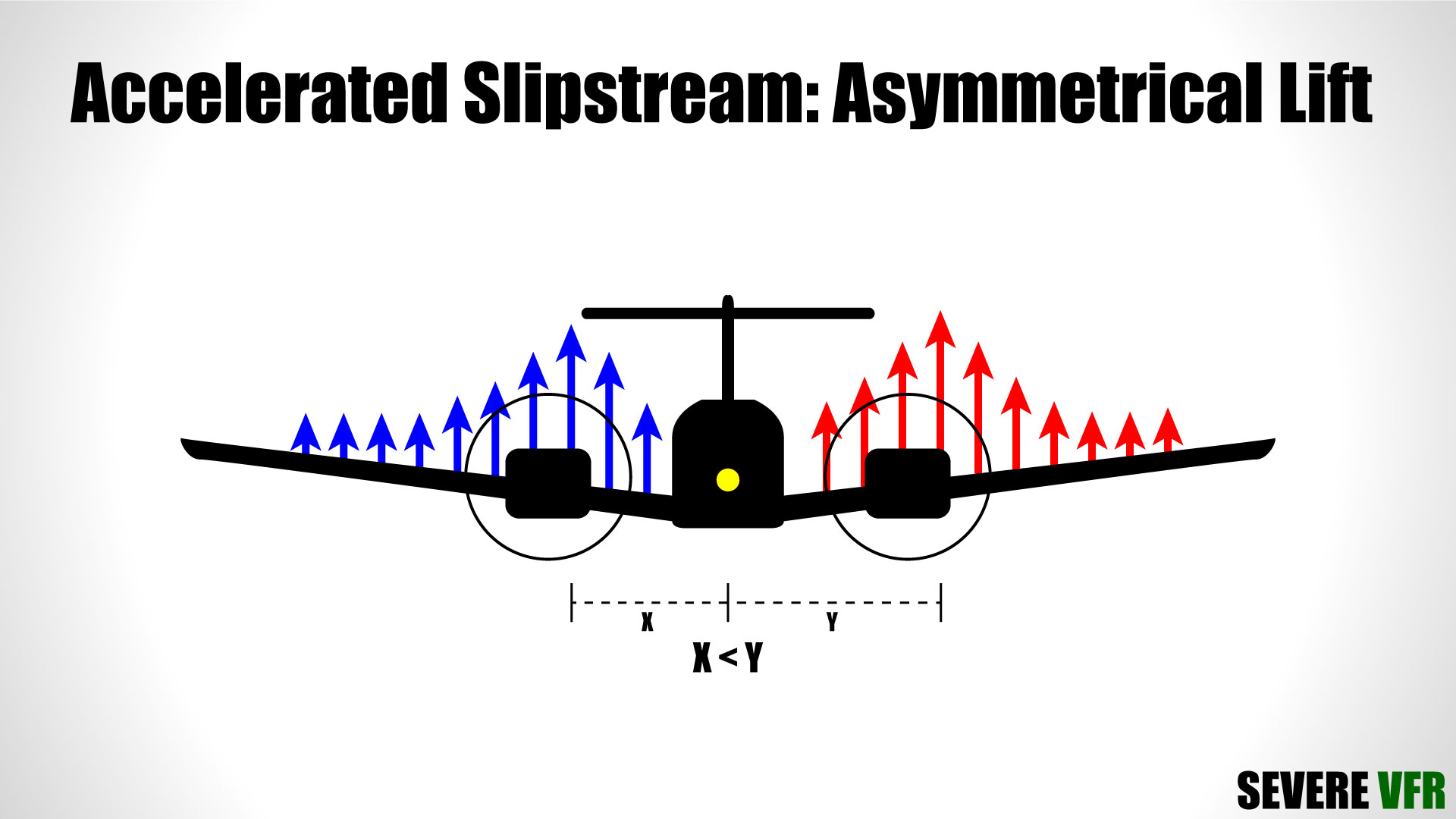 When air travels faster over an aircraft's wings, it results in the wing generating more lift. However, an aircraft's wing does not necessarily have to produce the same amount of lift equally across the entire wing.
On multi-engine aircraft, the accelerated slipstream created by the propeller results in an increase in lift directly behind the propeller, with the most lift being generated behind the downward swinging propeller blade.

On a conventional twin-engine aircraft, the areas of increased lift will be closer to the aircraft's center of gravity on the left wing and further on the right wing.

Since the lift's location is produced at a different distance from the center of gravity depending on the wing, it is said to be an asymmetric production of lift, otherwise known as asymmetric lift. 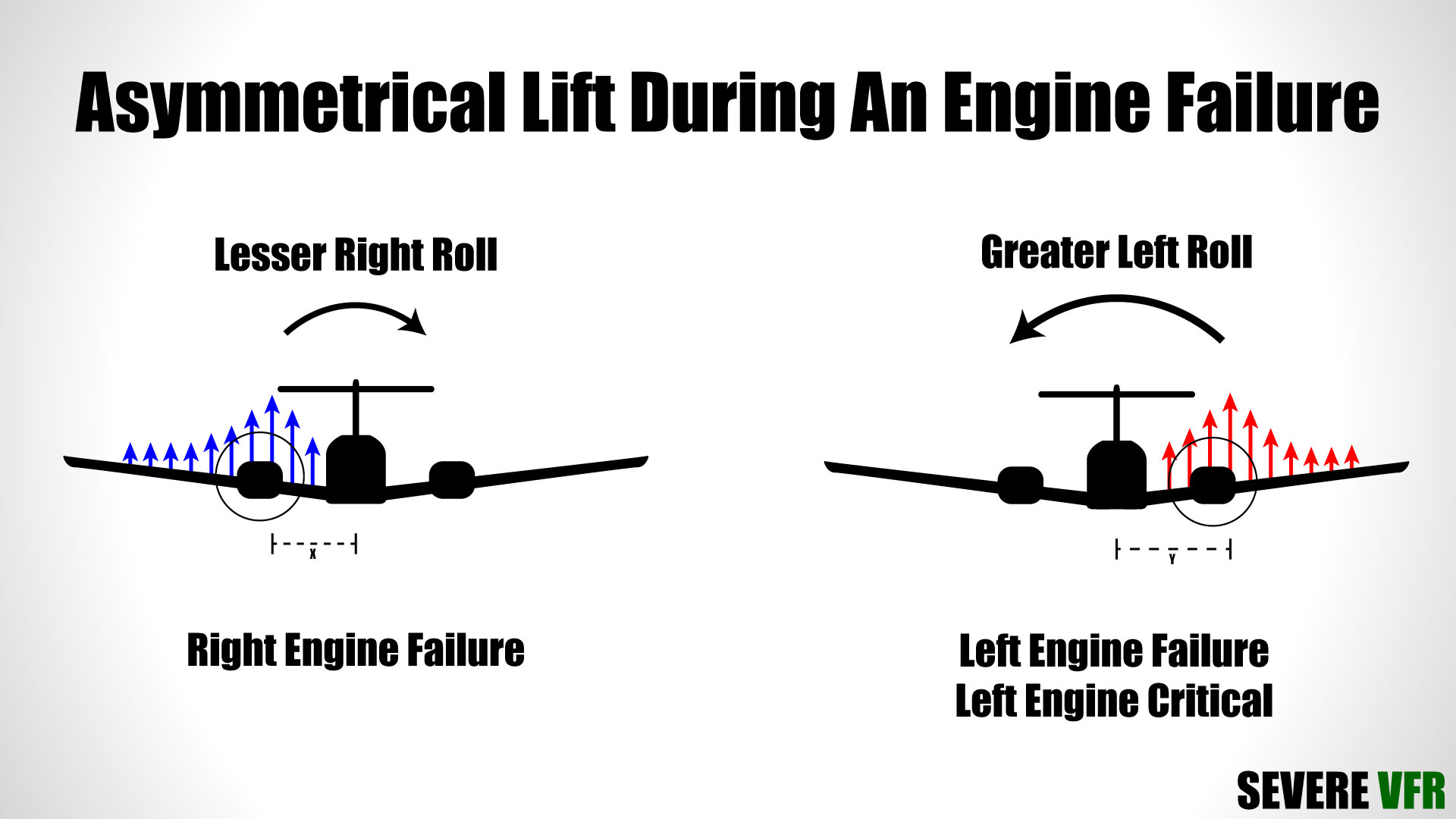 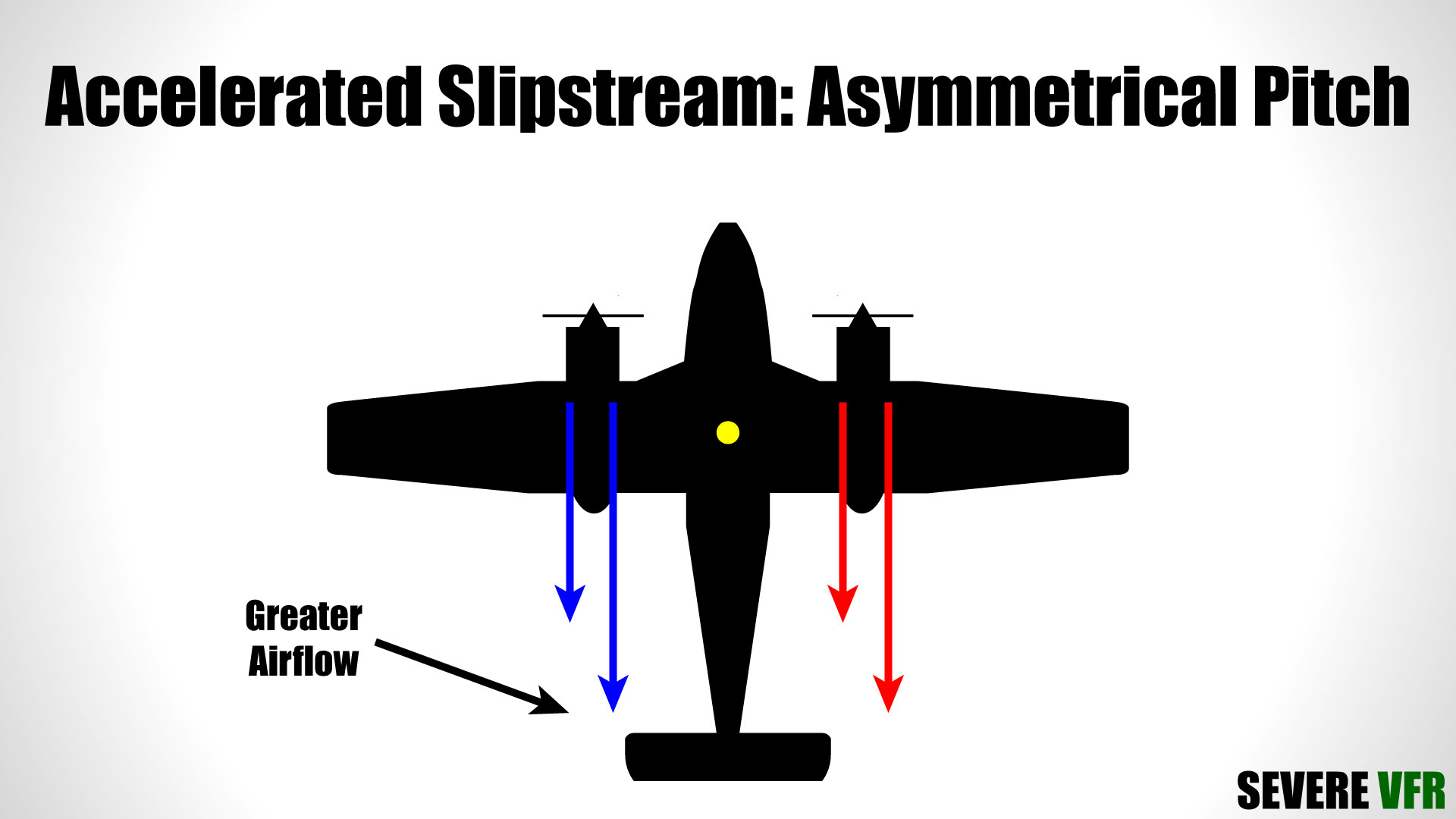 Accelerated slipstream also causes an aircraft to experience a greater or less prominent nose-down pitch moment depending on the failed engine. 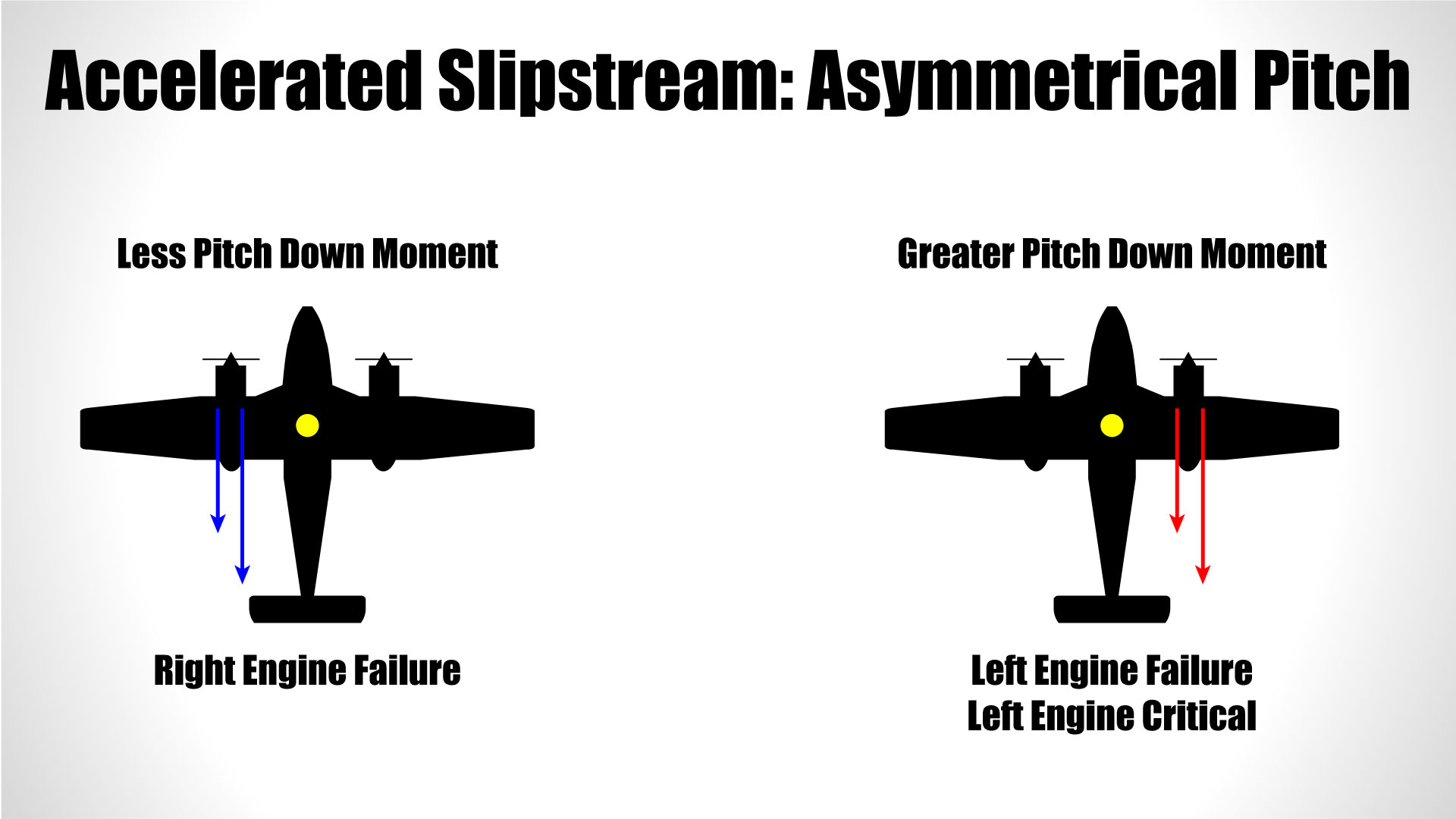 During a right engine failure, the aircraft will experience a less prominent nose-down pitching moment due to the left engine's ability to continue to accelerate air across the horizontal stabilizer.

However, during a left engine failure, the amount of airflow across the horizontal stabilizer decreases, resulting in a reduction in a tail downforce and, therefore, a more prominent nose-down pitching moment. The more prominent nose-down moment due to the loss of the left engine results in the asymmetrical pitch created by accelerated slipstream to be considered a controllability factor and for the left engine to be considered the critical engine.

Certain multi-engine aircraft attempt to remedy this greater nose-down moment by utilizing a T-Tail design. The T-Tail design allows the horizontal stabilizer to be held up and above the accelerated slipstream created by the engines. The end result is that the horizontal stabilizer will remain in the free airstream above the aircraft during an engine failure and won't be affected by a loss of either engine. Pilots will still notice a nose-down pitch moment during an engine failure. However, in this case, the nose down moment is due to a reduction in lift produced by the wings and not due to a loss of tail downforce. 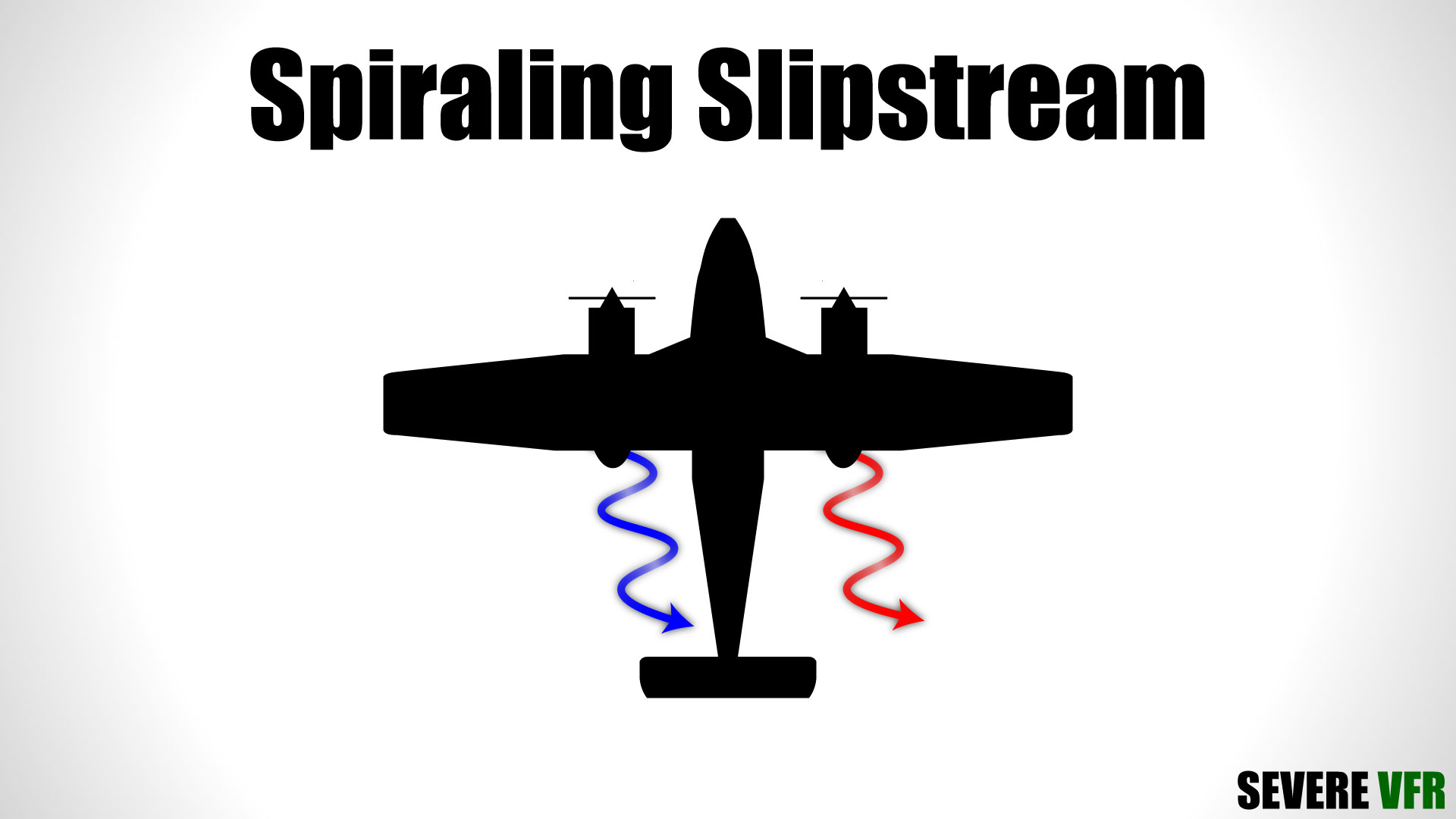 The high-speed rotation of an aircraft's propellers causes a corkscrew or spiraling rotation to the slipstream behind the propeller. This spiraling motion is the strongest at a high rpm setting and low forward airspeed.

Multi-engine aircraft produce one spiraling slipstream behind each engine that rotates in the same direction as the propeller. 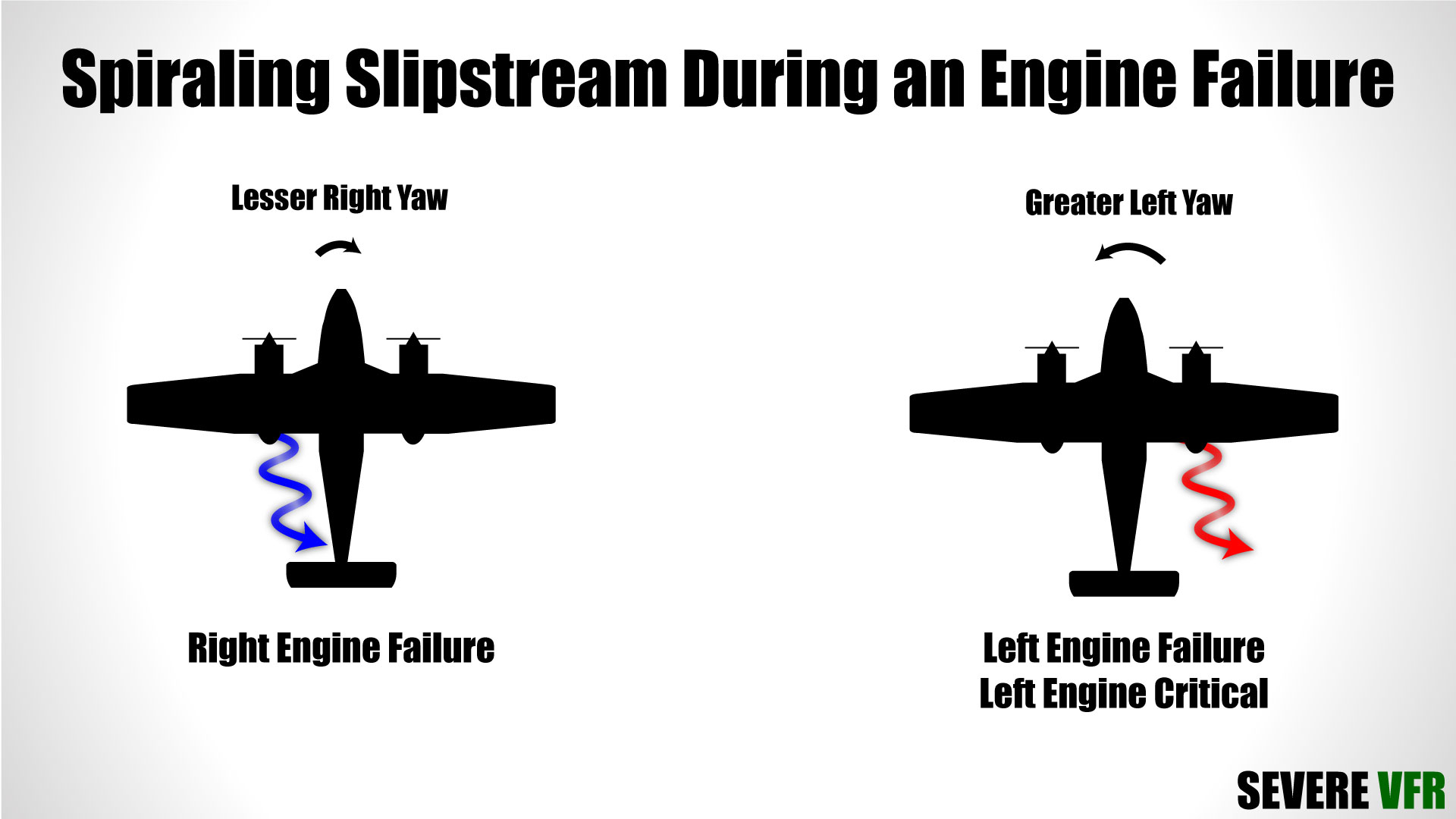 The spiraling slipstream produced by a conventional multi-engine aircraft is considered a controllability factor. It can either be beneficial to aircraft controllability or have no effect depending on the failed engine.

During a right engine failure, the spiraling slipstream produced by the left engine strikes the left side of the vertical stabilizer and pushes the aircraft's tail to the right. This causes the aircraft to want to yaw to the left and effectively reduces the aircraft's yawing motion towards the dead engine.

During a left engine failure, the spiraling slipstream produced by the right engine does not strike the vertical stabilizer due to its rotation. This causes the aircraft to have a greater tendency to yaw to the left towards the dead engine. 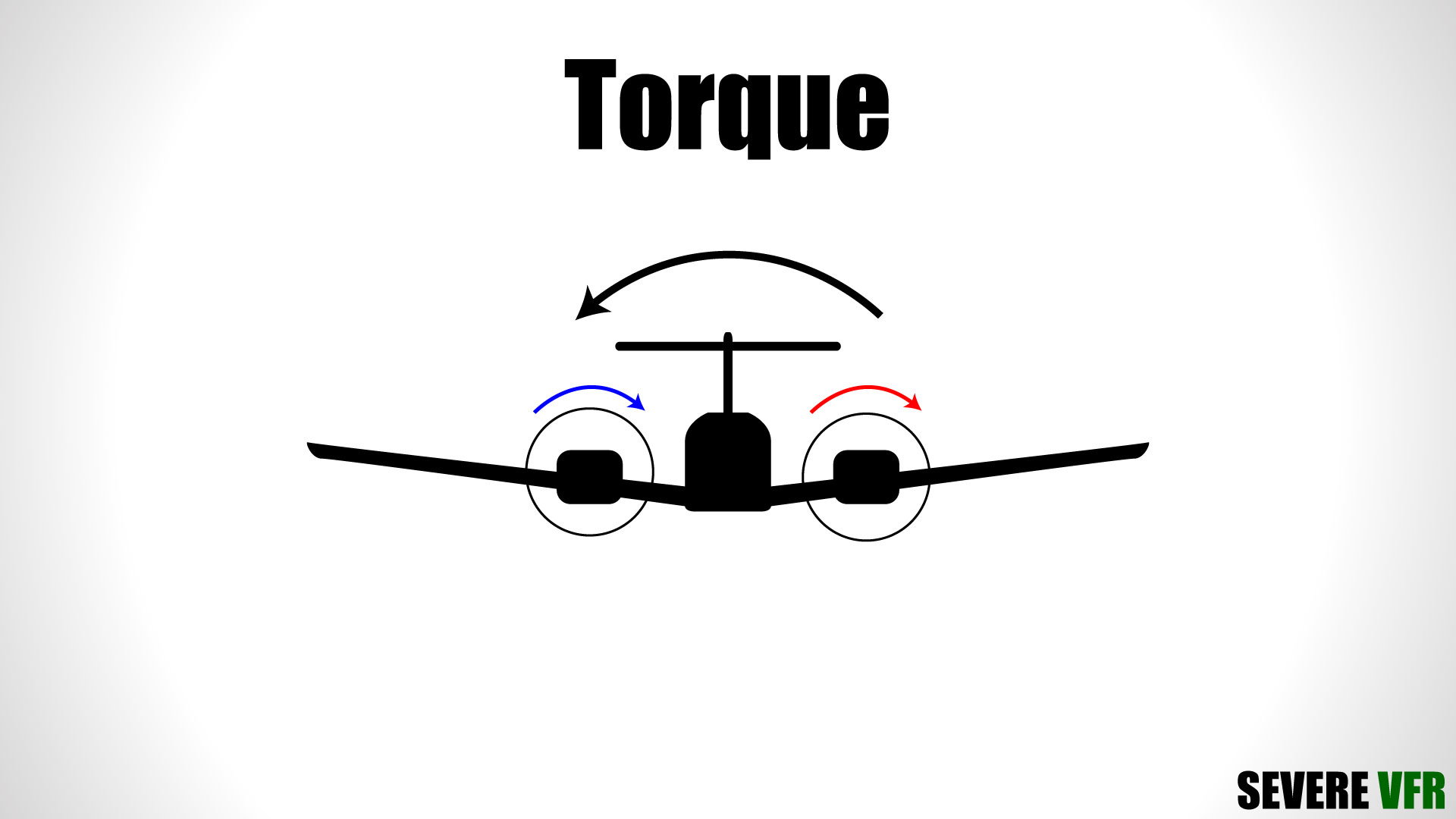 Torque is the equal and opposite reaction towards the moving components of an aircraft engine and propeller.

On a conventional twin, as the propeller turns clockwise as viewed from the pilot seat, the aircraft will experience a rolling motion counterclockwise opposite the propeller. 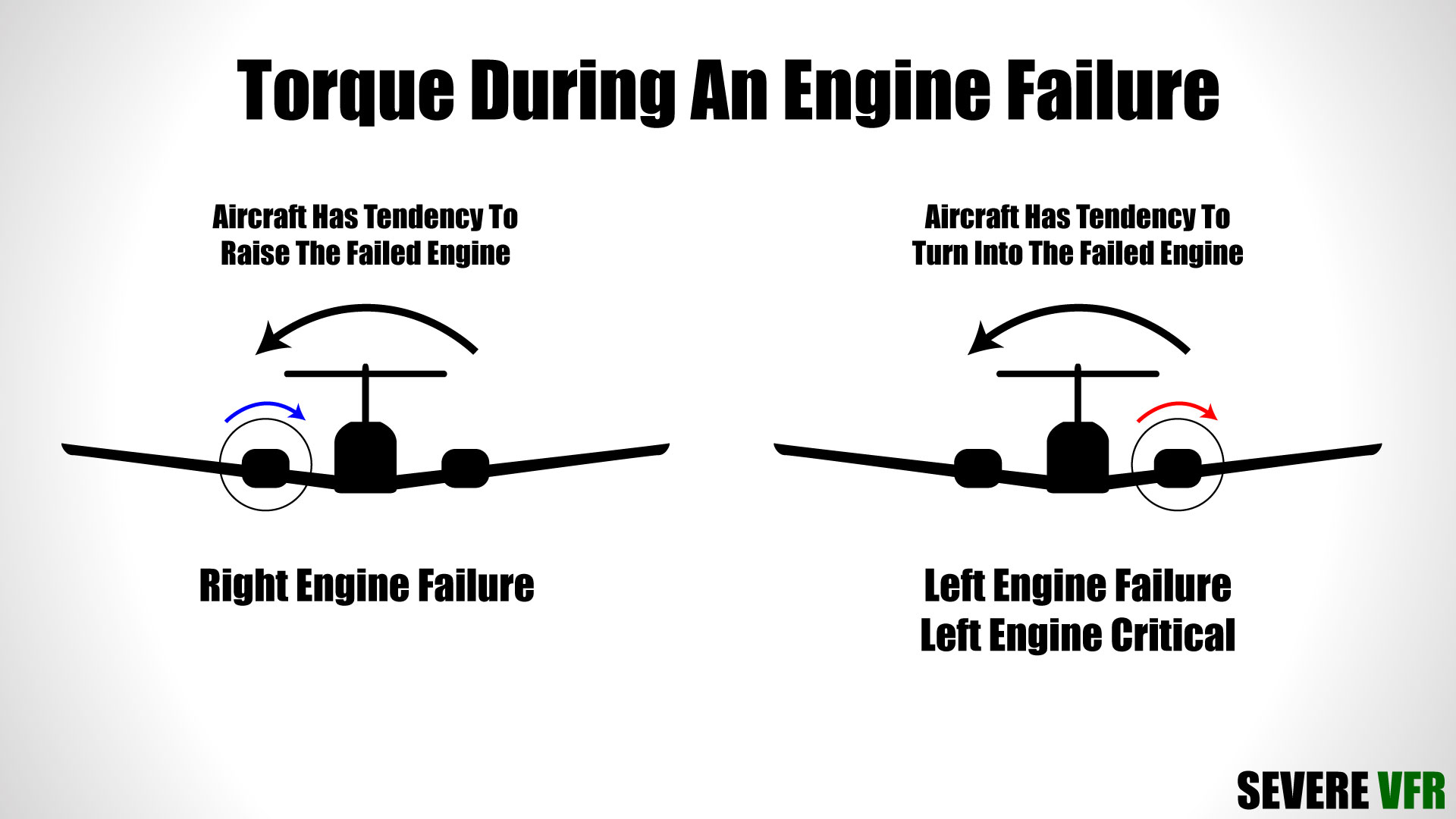 On a conventional twin-engine aircraft, the left engine's torque will attempt to bank the aircraft towards the left and naturally raise the dead engine during a right engine failure. This helps the pilot establish a zero-sideslip and allows the pilot to not require as much control authority to enter a zero-sideslip.

However, during a left engine failure, the right engine's torque will attempt to cause the aircraft to bank to the left, towards the dead engine. This natural tendency to bank into the dead engine makes it harder for the pilot to enter and maintain a zero-sideslip and requires the pilot to exert greater control forces to compensate.

Therefore, torque becomes a controllability and performance factor with the left engine critical due to the pilot experiencing a greater loss of control ability during a left engine failure and a reduction in the ability to establish and maintain a zero-sideslip.