Best Rate Of Climb Vs. Best Angle Of Climb 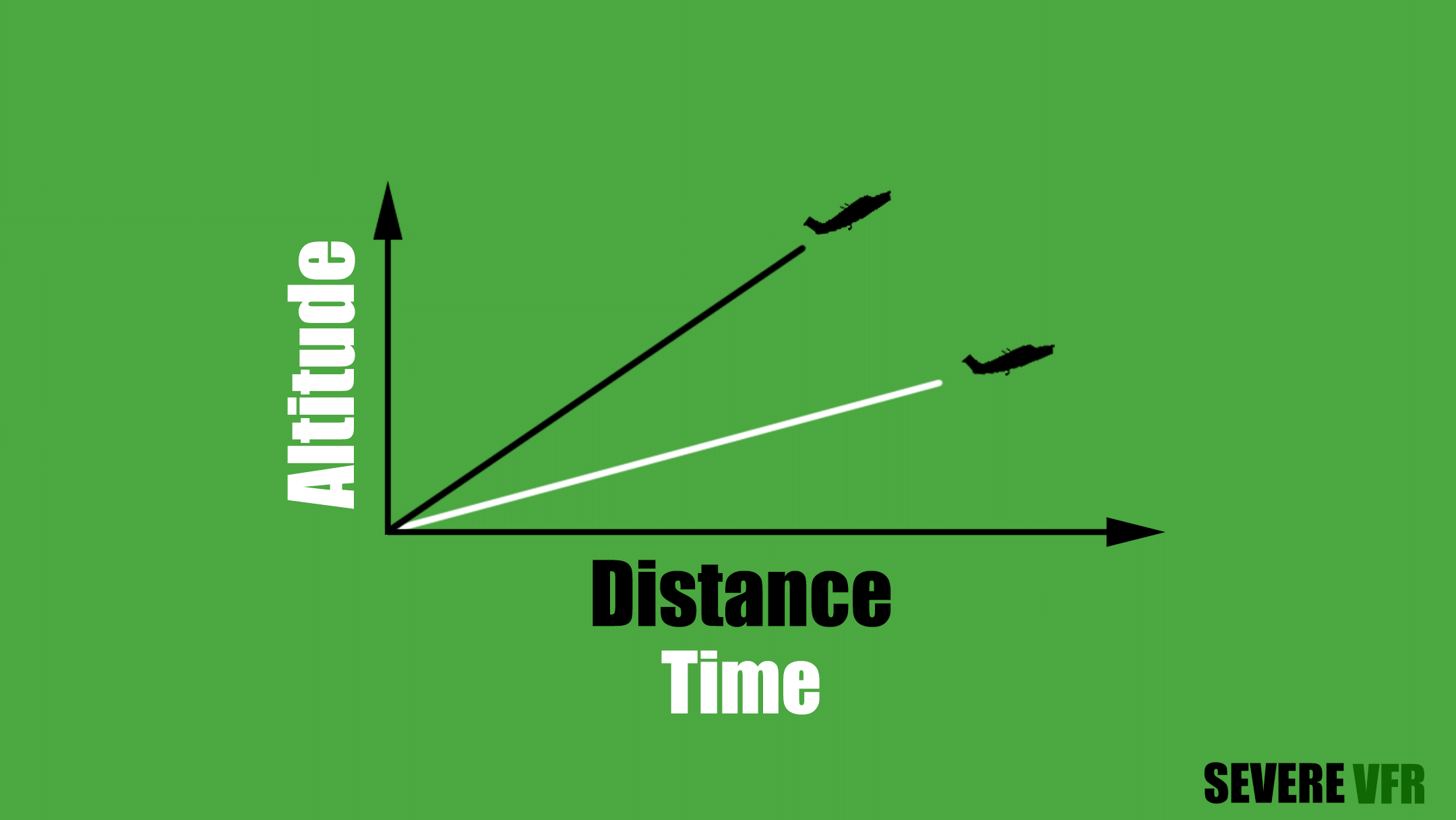 In This Article
Thrust Vs. PowerBest Rate of ClimbBest Angle of Climb

An aircraft's best rate of climb and best angle of climb are dependent on the aircraft engine's capability of producing thrust and power.

Thrust is used when determining an aircraft's best angle of climb and is simply a measurement of force.

For example, if you were to pick up a 10lb box you would have to exert a force (thrust) of 10lbs to pick it up.

Power is a bit more complicated and is used when determining an aircraft's best rate of climb.

Therefore, power is a measurement of how much energy is being transferred from one object to another in a given period of time.

Many automotive and aircraft engines give their rating of power in terms of horsepower, with one horsepower being equivalent to 33,000ft-lbs per minute. 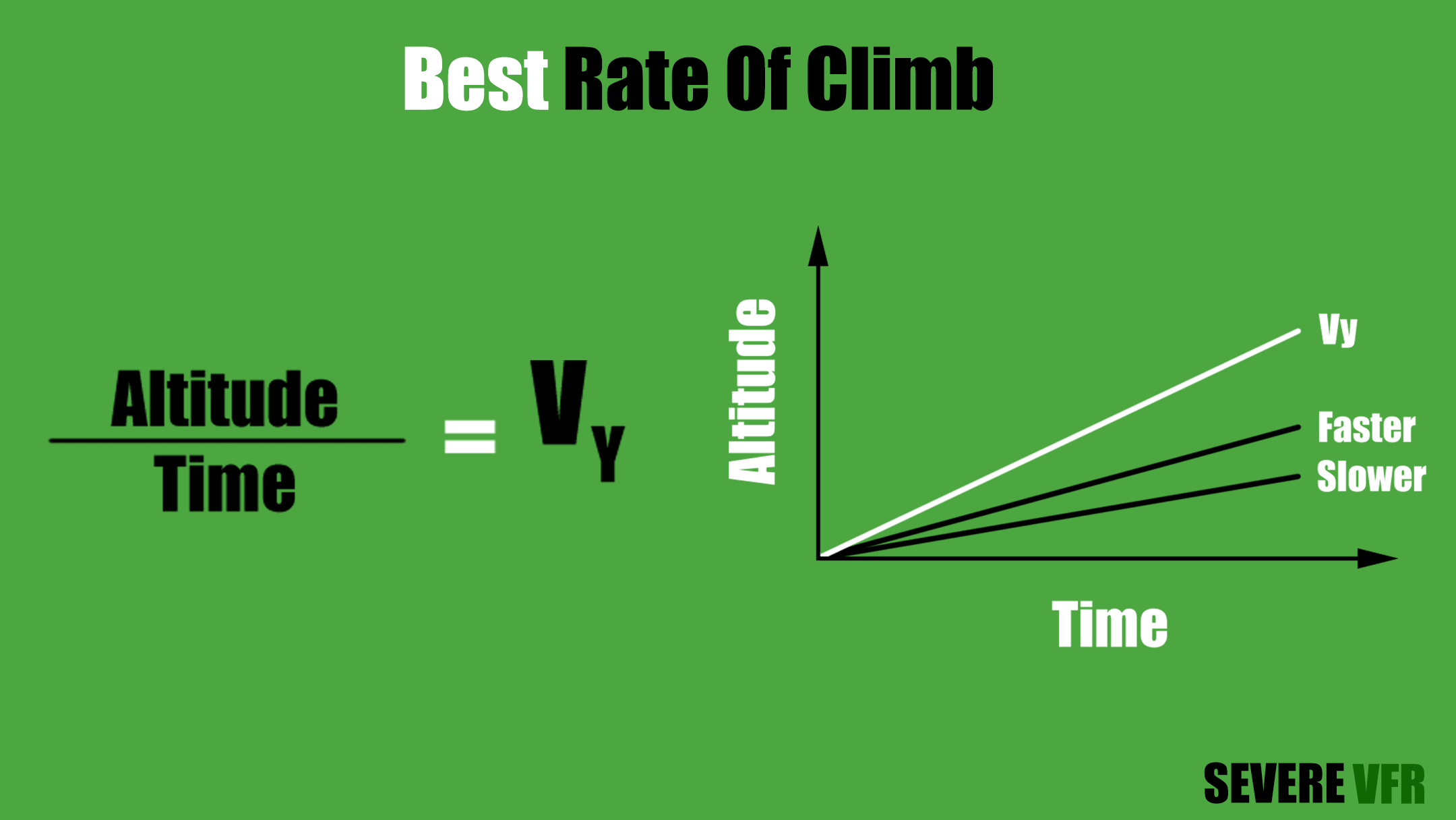 Best rate of climb, otherwise known as Vy, is the speed that will allow an aircraft to gain the most amount of altitude in the least amount of time—otherwise expressed as the ratio: Altitude over Time.

As the definition suggests, any speed greater or less than Vy will cause an aircraft to gain less altitude in the same time frame.

The best rate of climb speed for any aircraft is the true airspeed where the difference between power available and power required is greatest. 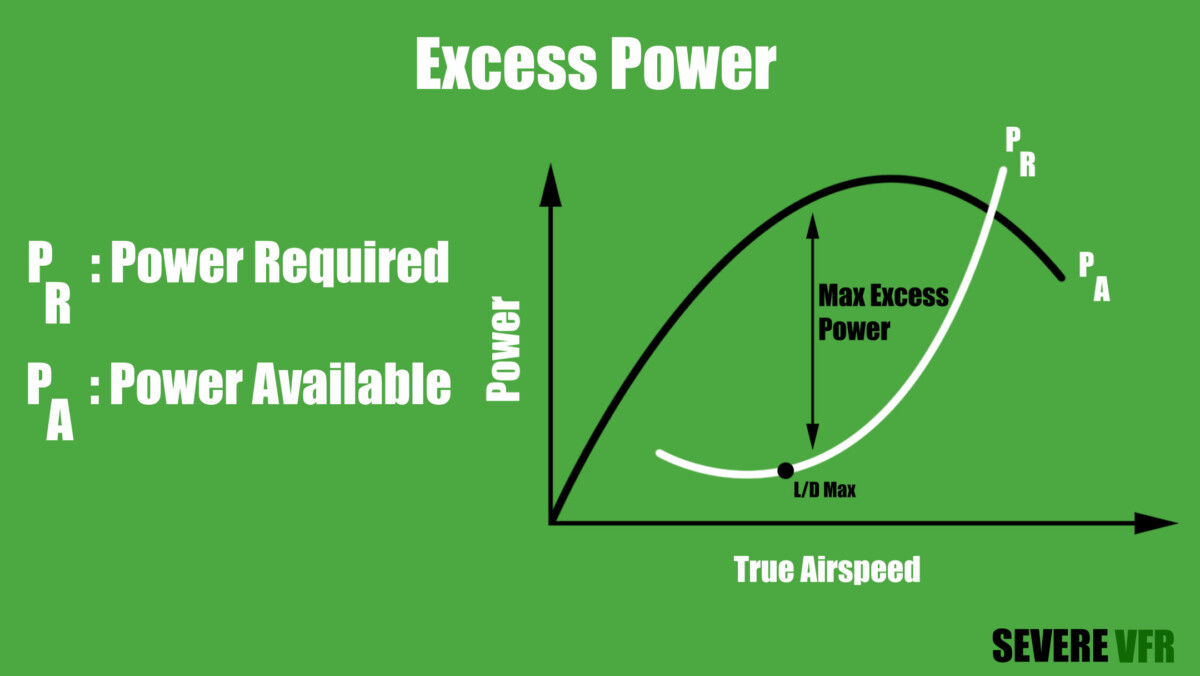 Power available is the amount of power that an aircraft's propeller can create and is dependent on the airspeed of the aircraft.

The power required is equal to the aircraft's total drag, with total drag being the sum of parasite and induced drag.

The difference between power required and power available is excess power. The true airspeed that gives the maximum amount of excess power is an aircraft's best rate of climb speed.

The point of maximum excess power for propeller aircraft is reached at a true airspeed just slightly past its max lift to drag ratio. For jet aircraft, the best rate of climb speed is reached well past the aircraft's maximum lift to drag point.

Best rate of climb is useful when a pilot needs to achieve the highest climb rate possible.

A high climb rate is beneficial because it allows a pilot to reach higher altitudes as soon as possible. This allows a pilot to get to an altitude of better fuel economy, winds, or even better weather sooner rather than later.

Some manufacturers state that traveling at a slightly faster speed than Vy is preferred. For instance, Cessna lists Vy for the Cessna 172s Skyhawk at 74 knots. However, Cessna also recommends flying at 80 knots to promote engine cooling while still getting a relatively high climb rate. 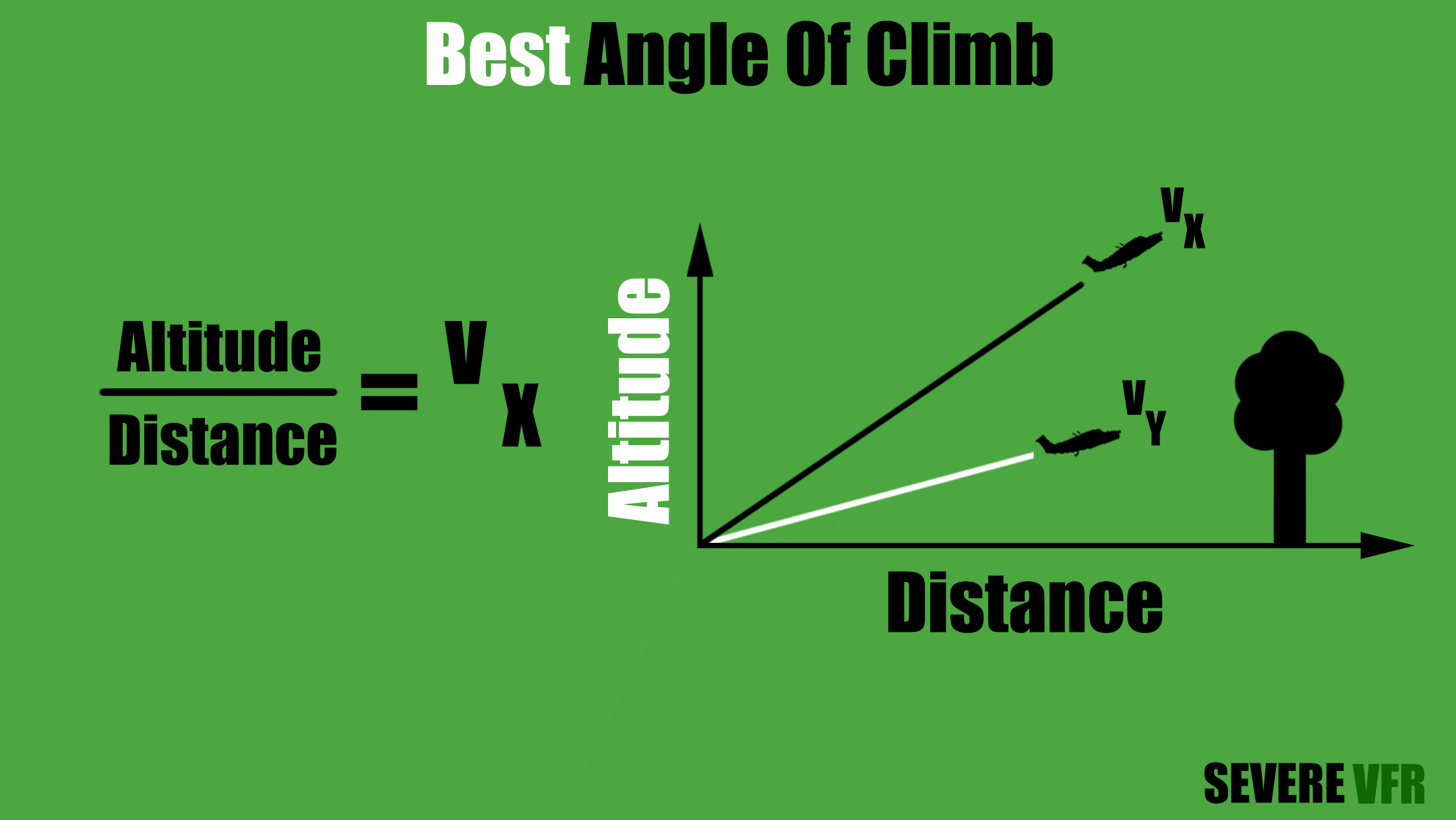 Best angle of climb, also known as Vx, is the true airspeed that allows an aircraft to gain the most amount of altitude in the shortest distance across the ground.

The best angle of climb speed occurs when the difference between thrust available and thrust required is greatest. 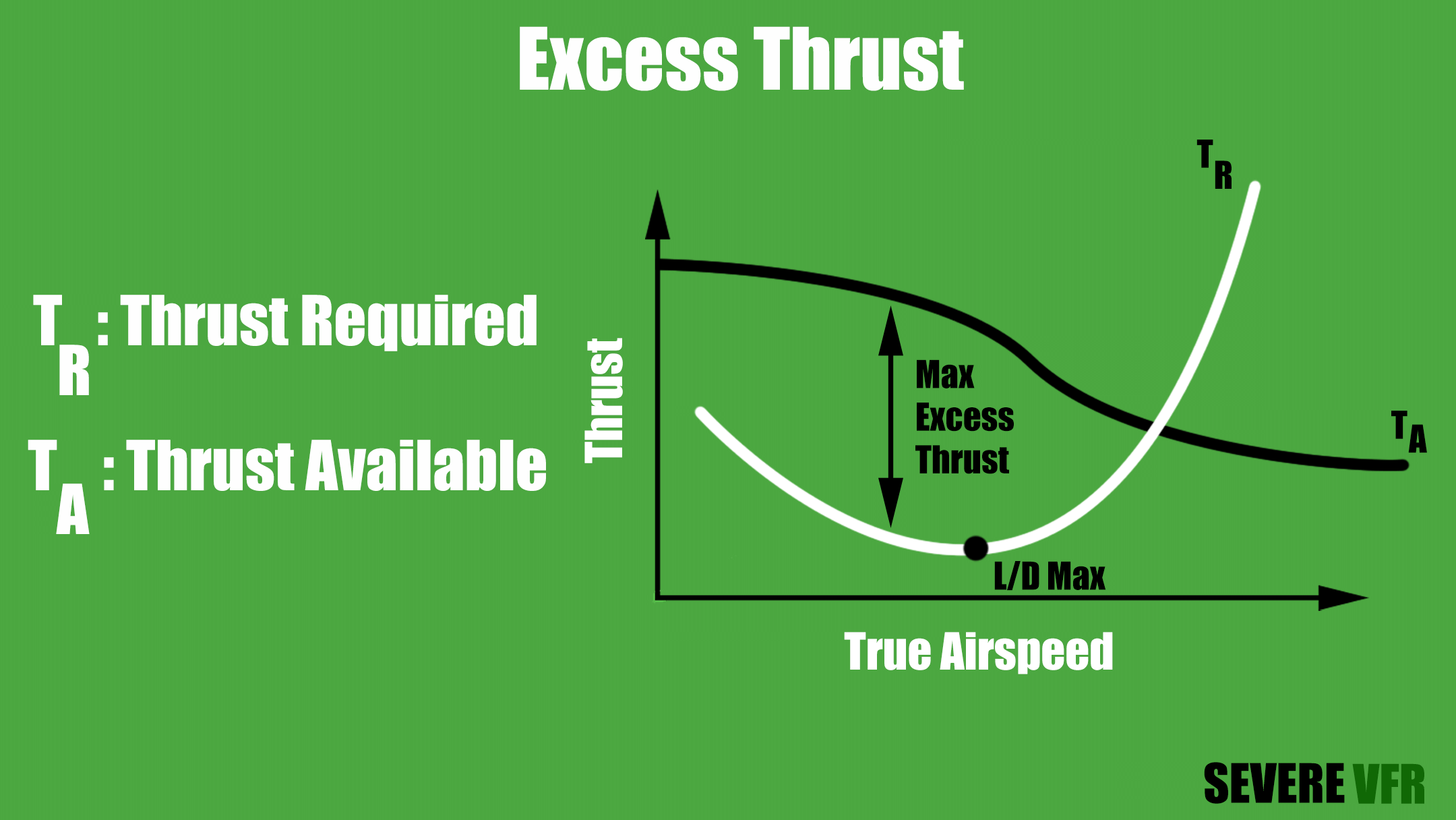 The thrust required is equal to an aircraft's total drag. Similar to the power available curve, thrust available changes as the propeller's angle of attack changes with the aircraft's true airspeed.

The difference between thrust available and thrust required is excess thrust.

The true airspeed that gives the maximum amount of excess thrust is an aircraft's best angle of climb speed.

The best angle of climb speed is used when a pilot needs to clear an obstacle. Generally, this is needed whenever the pilot is taking off from a short runway with or without an obstacle, and during go-arounds. Other times could include training maneuvers and stall recoveries.

Once obstacles are cleared, a pilot will transition to a faster climb speed, such as Vy, to gain altitude in the least amount of time possible.